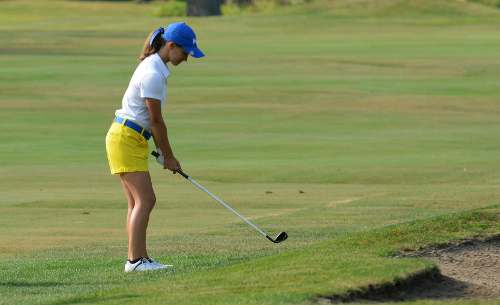 Independence’s girls’ golf team opened its dual season on Tuesday with a pair of wins over Berkshire and Orange. The Blue Devils topped Berkshire, 178-245, at Grandview Golf Course then beat Orange, 180-215, at Seneca Golf Course.

All of the Independence golfers turned in strong performances.

“The person I’m most happy for is Lyndsay Blum,” said Independence coach Karl Schuld. “She’s been working so hard to get back to where I know she can be. A 40 out of Lyndsay, if we can get anywhere near there from her that’s a fantastic score.”

Blum helped herself with an incredible chip shot on one hole against Orange.

“She chipped in from this impossible location,” Schuld said. “Her mom and her aunt were there and we were all thinking if she gets it close it would be a miracle. She was on the side of a hill, had no green to work with and popped this thing up. It was real beautiful in the air, hit on the green, two bounces and rolled in. A pro would have been proud. It was a tremendous shot.”

That shot, and her combined score of 84, has Schuld confident Blum is on track to lower her future scores.

“In any sport you go through ups and downs,” he said. “She expects real high things out of herself and today I think was a breakthrough for her. I think we have her headed back where we want.”

Independence returns to action on Saturday when they travel to Canton for the Midwest Classic.