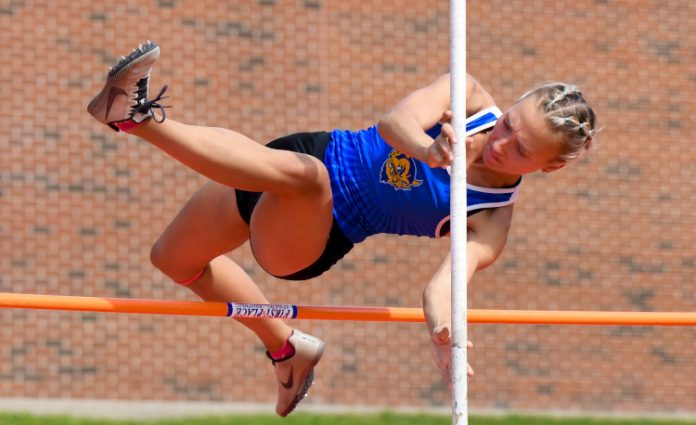 The Blue Devils finished with 163 points while the Wolverines were close behind with 157 ½. Kirtland placed third with 96 ½ points.

It was a bittersweet night for the Blue Devils as the boys’ team finished second, just ½ point behind Cuyahoga Heights, who finished with 131 ½ points.

“We had a lot of positives, for sure,” said Independence coach Jess Crooks. “The athletes came together and were working together as teammates to help each other perform and to push each other in those relays. We had some awesome performances.”

“I’m really proud of them,” Crooks said. “Watching Kaitlyn Grill and Jess Harb battle each other competitively and push each other to the point where they make each other better, that was awesome.”

Leichliter also placed fourth in the long jump (15-4) and third in the 300-meter hurdles (53.42). Adams was third in the high jump (4-8) and also ran a leg in the 4×100-meter relay to help the Blue Devils finish third. Alex Adams, Alberta Moreal, and Grace Taliaferro also competed in that event.

Nowak and McGreevy teamed up with Kate Cojohn and Madelyn Flynn to finish third in the 4×800 (11:28) and Taliaferro, Coljhon, Flynn, and Sara Luciano placed fifth in the 4×400.

Emmett Stralka and Kyle Zygmunt both won individual events for the boys’ team.

The Blue Devils had a number of second-place finishers including Martinez, who cleared 10-feet at the pole vault, Deston Boscarelli, who leaped 19-feet, 9 ½-inches in the long jump, and Landon Jatsek, who recorded a 32-foot, 8-inch triple jump.

Taliaferro, Martinez, Boscarelli, and Matt Wisniewski finished as the runners-up in the 4×100-meter relay with a time of 46.17 seconds.

Despite being edged out by Cuyahoga Heights in the final event of the evening, Crooks was pleased with the performance of her boys’ team.

“That’s always motivation,” she said of the narrow margin of victory for rival Cuyahoga Heights. “I was really surprised and happy for them. They came in second and were so close to first place. Cuyahoga Heights knows how to put their competitors in to really challenge you and battle for points and that’s a good thing. We had a lot of good individual performances and watching these young men grow and compete, I’m just proud of them. I think if we can get it all to culminate at the right time, it’s going to be a pretty thing.”