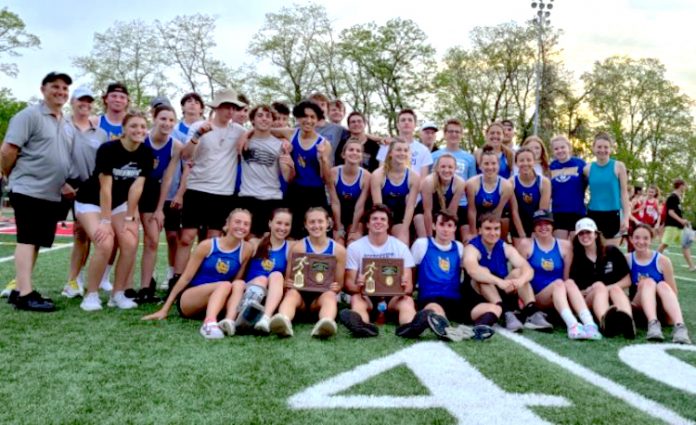 “I’m amazed but not surprised by their ability to compete,” said Independence coach Jess Crooks. “These guys are competitors I the finest sense.”

After winning district titles last spring, the Blue Devils knew they had the ability to defend their titles but even their coach was a bit surprised by their dominant performance.

“Last year, we had some people that didn’t do as well as they hoped,” Crooks said. “This group came back and rallied and lifted each other up.”

Senior Emmett Stralka had a hand in winning three events.

Stralka also advanced to next week’s regional meet in the 200-meter dash. He finished second to defending state champion Amere Talley of Lutheran East, who ran a time of 22.15, a state Top 50 performance. Stralka finished with a new PR of 22.28 seconds.

Adams also advanced to the regional meet in the 200-meter dash and high jump.

Leichliter also claimed a district title as she won the 100-meter hurdles in 16.04 seconds, a new personal record. She also advanced to the regional meet in the 300-meter hurdles and pole vault. She placed fourth in the 300 hurdles with a time of 50.54 seconds and second in the pole vault with a top height of 7-feet, 6-inches.

Independence couldn’t have swept the district titles without the depth of its squad.

While only the top four in each event advanced to the regional meet, the top eight place-winners earned points for the team.

McGovern, Braeden Lisowski, Kitagawa, and Charlie Meyer teamed up to place fifth in the 4×800 with a time of 9:34.71.