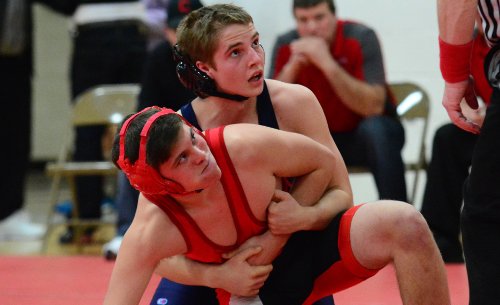 Independence left the 2015 OHSAA State Dual Wrestling Tournament Region 19A quarterfinals at Rootstown with a moral victory after nearly knocking off the top-seeded Rootstown Rovers.

The Blue Devils gave up 18 points in forfeits and had an opportunity to steal the dual meet with a pin at heavyweight. Paul Deely won the match, 8-3, but the Rovers advanced to next week’s Region 19 semifinals with a 38-36 win over the Blue Devils.

“Looking at it, I’m thinking, ‘Our state placer pins at heavy we beat Rootstown 39-38, is this really possible?’” said Independence coach Ken DeAngelis. “Their heavyweight did what he should have. He ran and ducked and stayed off his back. Paul did everything he could except take off his shoes and beat him with them. We ended up winning the match but lost the dual by two.”

Rootstown’s Dalton Leightner opened the dual with forfeit at 106 pounds and the Rovers went on to win the next three weight classes to take a 22-0 lead over the Blue Devils. Brad Trescott won by pin at 113 and Tony Paulucci collected a forfeit at 120. Seth Hayes continued the Rovers’ run with a major decision at 126.

Independence’s Drew Benos temporarily snapped Rootstown’s winning streak with a 3 minute, 40 second pin at 132. Jason Sadler then put Rootstown on top, 26-6, with a major decision at 138.

The Blue Devils climbed back into the match when Jacob Spino and Tanner Hadick recorded back-to-back pins at 138 and 145, respectively, and Kevin Clymer won a 6-5 decision at 160.

It was at that point DeAngelis rolled the dice and gave up a forfeit to bump up Nick Sia and A.J. Senick to 182 and 195, respectively.

The move paid off as Sia and Senick both pinned their Rootstown opponents and the Blue Devils took their first lead of the match, 33-32.

A pin at 220 gave Rootstown the lead for good.

“No doubt about it, they’re king of the mountain,” DeAngelis said. “We knew looking at the landscape they were the team to beat. In the process I think we gained some respect. This was a character builder. Rootstown is where we want to be. We hung with them toe-to-toe and we’re heading in the right direction.”

Independence beat Waterloo, 41-36, in the first round.

“We had a couple close matches,” DeAngelis said. “The thing I love about dual meets is there’s so much more coaching involved. You look at matchups and try to match strengths on strengths to squeeze out the most points where you can get them. It was a fun night.”