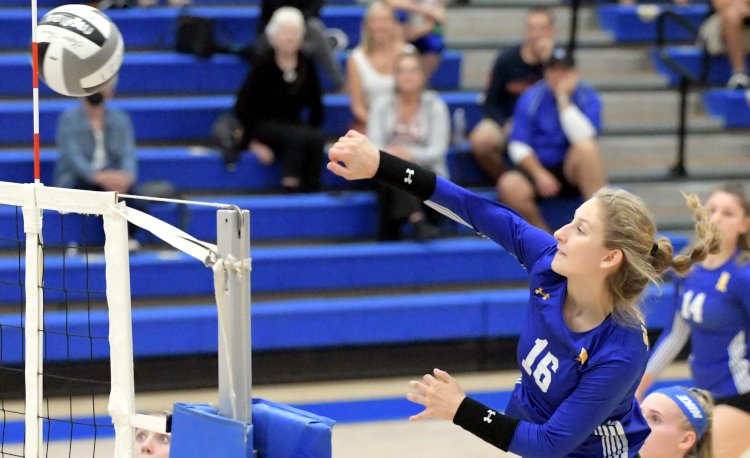 Independence wasn’t at its best in Wednesday’s non-conference match at Crestwood but the Blue Devils grinded out a 3-0 sweep over the Red Devils.

With the win, Independence improved to 21-0 on the season.

“We didn’t play our best tonight,” said Independence senior setter Abby Avila. “We have played a lot of tough games and we are all beat up. We just grinded through that game even though we weren’t at our best.”

“The key to winning tonight was just communication and energy,” said Independence freshman Sofia Smotek. “At times, it was very close and the only thing we needed was to talk to each other and figure out the problem. Once we did that, the game went smoothly and everything fell into place.”

The Red Devils held a 17-12 lead in the third set but again, Independence rallied to pull out the victory and earn its 17th sweep of the season.

Smotek, one of two freshmen seeing significant playing time this season, rose to the challenge at Crestwood.

She has gained valuable experience this season and is playing with more confidence.

“Being one of the youngest on the team with such great players to look up to has really made me play more confidently,” she said. “Coming in so young was a bit intimidating, but with upperclassmen who take charge and stay by my side really made it easier.

Independence closes out the regular season at Wadsworth on Saturday.

Although the Blue Devils have lofty goals for the postseason, they are focused on closing out the regular season with an undefeated record.

“We are all very excited for the postseason,” Avila said. “This has been something we have all been waiting for all year. If we win our final game of the regular season and stay undefeated I think that is a big threat to other teams in playoffs because we beat a lot of private big schools. I would love to go undefeated and so would everyone on the team.”