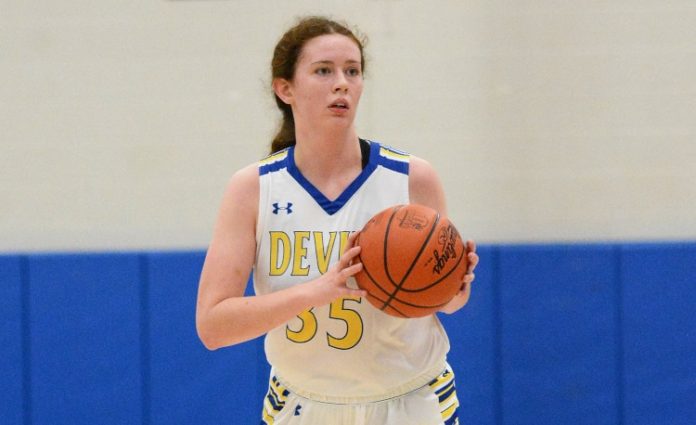 When Independence traveled to rival Cuyahoga Heights on Wednesday the Blue Devils did so expecting a defensive battle where every possession would matter.

That’s exactly how the game played out with Independence picking up the road win, 39-32.

“As we always say, the first team to 30 typically wins that game,” Independence coach Mike Marcinko said of the rivalry. “It’s never easy. It’s just a grind it out game.”

Cuyahoga Heights is known for its aggressive and ultra-stingy defense. In fact, Heights entered the game allowing just over 22 points per contest.

“They’re going to play hard, they’re going to play physical and they’re sold defensively,” Marcinko said. “They’ll execute and run their stuff offensively but we had our moments. It wasn’t a clean game by any stretch of the imagination for us, but I thought we defended well too. We had to defend what they run and do the best we can to wall them off and be solid.”

Anna Weber led the Blue Devils with 14 points. She ended the night with four 3-pointers, including two in the fourth as Cuyahoga Heights made its run.

“They know there’s pressure attached to what they have to do and they know they have to rise to the occasion no matter what,” Marcinko said of Weber and DiGeronimo, two of Independence’s most experienced players. “Heights worked both of those girls hard. Al (Martin) does a great job game-planning so they earned every point they had. They were getting man-handled and defended but they got some shots off.”

Kara DeSmith contributed to the win with five points and Natalie George and Addie Westerburg each scored four. Alex Adams hit a free throw in the win.

Led by Tess Conroy, who matched Weber with 14 points, Cuyahoga Heights made a run at the Blue Devils in the fourth quarter.

Conroy scored seven points in the quarter and Julia Harris, who finished with nine points, drained a pair of 3-pointers, but the Blue Devils held off their rivals down the stretch.