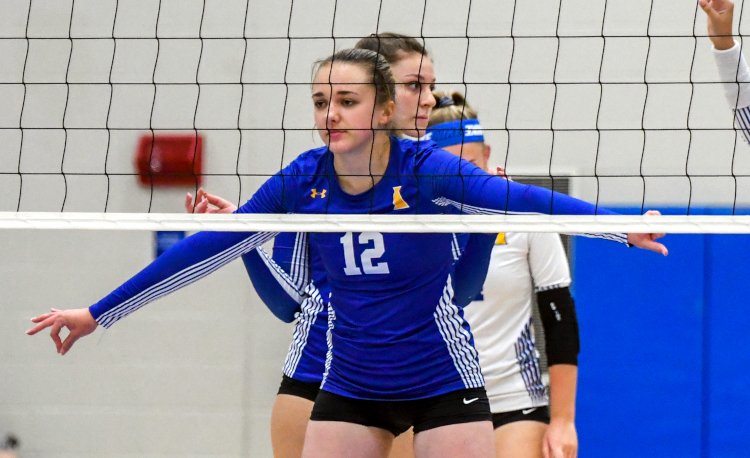 Defending Division III state runner-up Independence had a big day at the Nordonia tri-match on Saturday.

The Blue Devils swept a pair of Division I teams who won district titles last fall by beating Riverside 2-0 and closing out the day with a 2-1 win over host Nordonia.

“We got through it,” said Independence coach Tony Messina. “Riverside was big and they blocked a lot, but our girls played well. Nordonia is very good and they had a really, really good player. They were solid. The girls gutted through it.”

Independence opened the day with a 25-16, 25-14 win over Riverside. The Beavers won a district title last year then fell to Division I state runner-up Padua in the regional tournament.

The Blue Devils faced a much stiffer challenge in Nordonia. The Knights also won a district title last fall.

“The girls did what they needed to do,” Messina said. “The match with Nordonia was a classic. The first set was 30-28 and we could have closed it out in two but we made a couple of hitting errors and they won the second. We came back in the third and played well.”

The loss in the second set was the first time all season Independence has dropped a set. The Blue Devils are 9-0 and have won 25 of 26 sets played.

“I told the girls, ‘OK, we’ve got that out of the way, now let’s see if we can turn it around and get it back together and win this match,’ which they did,” Messina said. “I don’t like to go three, but it’s good for us to lose a set and come back and get it done. I’m happy with that.”

Macy McNamara set the tone for the day with her aggressive serving and setter Abby Avila was effective in distributing the ball to the Independence hitters.

That allowed Hanna Wilson and Grace Taliaferro to have a big day. Sammy Barther also put down a few clutch hits in the Nordonia match.

“Macy McNamara had a good day. She served great the first couple of sets,” Messina said. “Hanna did well and Abby kept it all together. Gracie had a good day. At critical times, Sammy Barther put two or three balls down when we really needed them in those two-point games.”

Taliaferro and her teammates were excited to play against a pair of quality opponents and she knows that level of competition will help to prepare the Blue Devils for their long-term goals.

“It was exciting to be able to compete and play against some bigger schools in the area,” she said. “Nordonia was the most competitive match we’ve had so far this year, so it was very exciting to play in a pressure-filled atmosphere where we were challenged and had to fight. We haven’t played a lot of competitive matches thus far, so playing teams that challenged us today made us better.”

She also felt the opportunity to bounce back from a lost set will help the Blue Devils down the road.

“Losing a set today was good for us because we need to know how to respond to adversity and tough situations,” she said. “Being able to bounce back after losing the second set and win the match was great. Minor setbacks are going to happen from time to time, and today as a team we didn’t play our best, but we came together and gutted through.”

Taliaferro credited Avila and the rest of her teammates for her solid performance.

“I’m so lucky to have Abby as my setter. She’s a baller and the best setter I’ve ever had the privilege of playing with. She gave me great sets today, which gave me opportunities to score,” Taliaferro said. “My mindset going into each match is to play fast, smart, and give 110-percent effort every time I step out onto the court. Being an undersized hitter, I have to use my jump and speed to my advantage.”