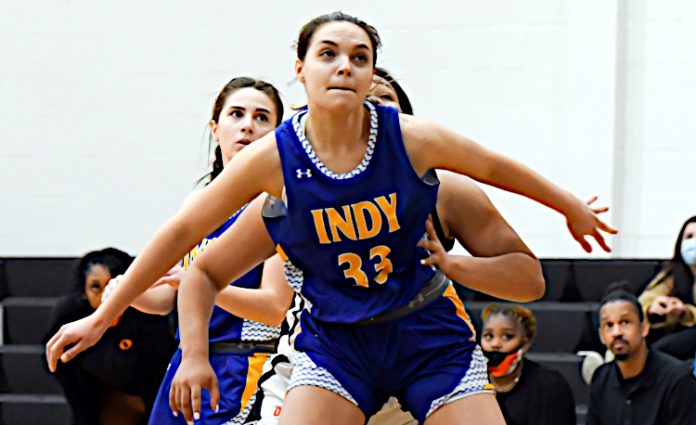 Independence held off visiting Brooklyn on Tuesday, 43-36, to extend its winning streak to six straight games.

But, it didn’t come easily.

The Blue Devils led at halftime, 31-14, then watched as the Hurricanes dominated the third quarter to tie the game at 32-32 entering the final eight minutes of play.

“We had three good practices going into Wellington and we played really well. We had two days off and a subpar practice on Monday and that’s how we played,” said Independence coach Mike Marcinko.

Independence’s success in the first half started on the defensive end.

Steals led to layups, deflections and tips prevented the Hurricanes from finding any rhythm, and the offense was effective.

That all changed in the third quarter.

The Blue Devils did enough in the fourth quarter to pull out the win.

Rieger, who finished with a team-high eight points, scored three in the fourth.

“She had some put-backs and free throws and a couple of drives to the basket,” Marcinko said of Rieger. “She knew where she had to be and she put herself in a good position and was rewarded for that.”

Alex Adams scored three of her six in the final eight minutes and Kara DeSmith and Casey Adams both scored two points in the quarter.

“We haven’t had many dud games this year, and this was a dud, but we still found a way to win,” Marcinko said. “We struggled and we found a way to get through it.”

With the win, the Blue Devils improved to 7-1 overall and 4-1 in the Chagrin Valley Conference Metro Division. Independence travels to Crestwood on Friday.

Seven from CVC named All-Ohio in Division III and IV