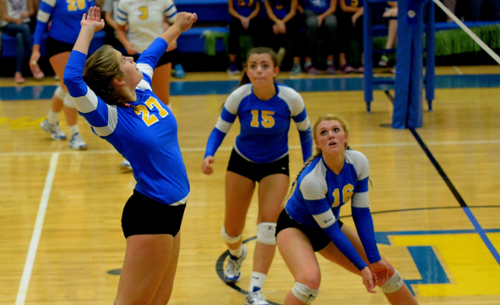 “Once we knew we were going to game five we told the girls that nothing before now matters at the moment,” said Independence coach Megan Osysko. “We’ve got to play to 15 points to the best of our ability and hopefully come out with a win.”

Lutheran West got off to a fast start, especially on defense.

“Their defense was definitely picking up a ton of balls,” Osysko said. “It was like playing against our defense, which is something we don’t see a lot of. In game four, their outsides played their best, which is what I had expected most of the game. In game four they just kind of went off and we weren’t putting up the block or slowing the ball down. That made it tough for our defense to play.”

Forced into a fifth set, the Blue Devils overcame several unforced errors to win the match.

“We definitely had some errors in game five,” Osysko said. “I think we ended up with four or five missed serves but we pulled it together at the end and got the win.”

She finished the game with 49 assists and 14 digs.

“Our outsides put the ball down quite a bit and our middles stepped up as well,” Osysko said. “They were able to close some of the blocks. It was a team win. Hallie was able to get to the ball off of serve receive. Everyone pulled it together at the end.”

Independence will play top-seeded Gilmour Academy in Thursday’s district championship game. The Lancers knocked the Blue Devils out of the 2013 regional tournament and are 11-0 against the Blue Devils dating back to 2007.

“From here on out, it’s just going to be between the ears for our team,” Osysko said. “We’ve got to come with a stronger mentally. We can’t play scared or afraid. We just have to play it point by point and work for our points.”