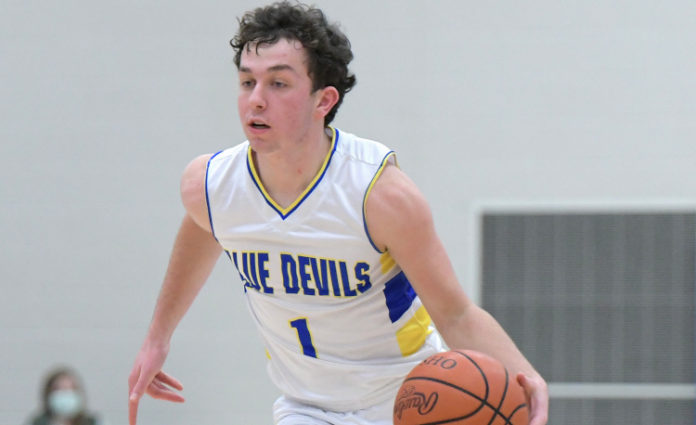 An early double-digit lead didn’t hold up but Independence made key plays down the stretch to beat visiting Cuyahoga Heights on Tuesday, 49-41.

The Blue Devils led 15-4 after the first quarter and 24-14 at halftime but had to fend off Heights in the second half to secure their fourth straight win to improve to 6-4.

“We started off strong and just let our foot off the gas pedal,” said Independence coach Kyle Johnson. “We started getting sloppy with the ball and stopped doing what got us the big lead in the first quarter. Overall, I’m happy that the kids stuck it out and were able to get the win.”

Cuyahoga Heights pulled to within seven with just under two minutes remaining when Casey McGhee stepped outside the arc and drained a key 3-pointer to push the lead back to 10 points.

“It was a good team win for us over our rival,” McGhee said. “Towards the end, Heights started to press and we ran our press break exactly how we draw it up. Kyle (Zygmunt) and Eric (Mitrisin) are very unselfish guards who always look to find the open shooter or big in the paint. Kyle broke their trap and attacked the middle, he found me open in the corner and I shot with confidence like coaches always say.”

Mitrisin led the Blue Devils with a game-high 15 points.

He scored eight in the first quarter off of a pair of 3-pointers and added another long-range shot in the second quarter.

“We had good ball movement, which got me a lot of open shots early,” Mitrisin said. “I just shot with confidence and my teammates did a great job of finding me when I was open.”

Leading 42-28 entering the fourth quarter, Independence worked to run down the clock but Heights kept up its attack and outscored the Blue Devils, 13-7, in the final eight minutes.

“In the fourth quarter, we focused on not turning the ball over and getting quality shots,” Mitrisin said. “It’s always exciting to beat our rival but tomorrow we need to come ready to work and focus on our next game.”

Zygmunt and Aidan Coljohn both contributed to the win with six points.