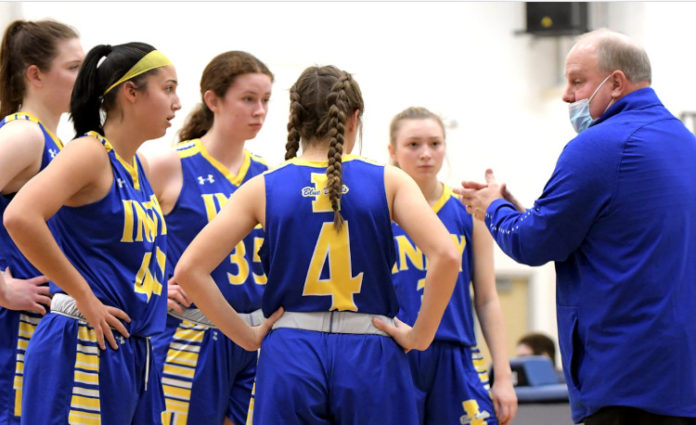 Independence hit a rough patch in the second quarter of its non-conference game against visiting Berkshire on Saturday but the Blue Devils regrouped and went on to beat the Badgers, 54-37.

The Blue Devils, who improved to 5-2 overall, led 20-6 after the first quarter but the Badgers pulled to within 24-17 at the break.

“We told the girls, for three of the four quarters we were on point,” said Independence head coach Mike Marcinko. “The second quarter, between subbing and foul trouble, we didn’t execute well at all. We turned the ball over, we didn’t execute well, and we made bad reads, so instead of carrying through on a good first quarter, we kind of stalled and then came back and did a much better job in the third quarter and then we started subbing around in the fourth and got everybody in. To a person, up and down the roster, everybody did a really nice job closing it out in the fourth quarter.”

Independence also found itself in early foul trouble which forced Kara DeSmith and Addie Westerburg into much bigger roles.

They both rose to the challenge as Westerburg finished with 10 points and DeSmith contributed with eight.

“They both really defended and rebounded well,” Marcinko said. “I thought they really pitched in because of the foul trouble. We had to move some people around and change our plans on the fly because our point guard and post player are out of the game for a third of it or more. I’m very happy for them because I’ve been waiting for things to come together because they’ve been working hard and making good reads and decisions on game day but the ball wasn’t going in the hole. It was good to see the ball go in the hole for them and for them to find some success to help us spread out our offense.”

After Berkshire outscored Independence, 11-4, in the second quarter, Anna Weber found her stroke in the third to regain the momentum for the Blue Devils.

Weber drained three 3-pointers in the period on her way to a team-high 12 points.

“The last few games, we did a poor job as a staff running some stuff for her and getting her some opportunities,” Marcinko said. “I thought that came together tonight, especially in the third quarter, as far as the reads people made and the reads she made. She might have had three assists that quarter too. Some of the stuff we did, her driving and coming off the ball screen, she either scored or distributed to someone who did score.”

Lydia Kastor scored a game-high 14 points for the Badgers, who dropped to 2-3. Kastor also drained the 100th 3-pointer of her career in the game. Kylie Neumore scored 11 points for Berkshire.

Independence tees off on rival

Badgers look to develop in a hurry