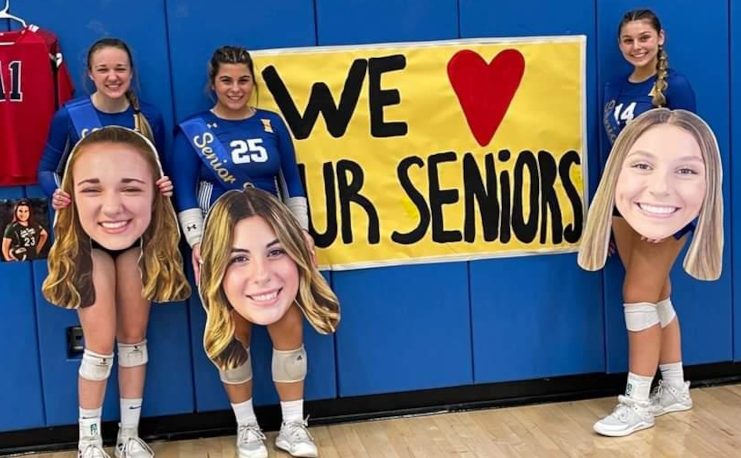 Independence’s volleyball team honored its seniors prior to a 3-0 sweep of visiting Trinity on Thursday.

With the Senior Night win, the Blue Devils improved to 11-4 overall and 8-0 in the Chagrin Valley Conference Metro Division. The Blue Devils also clinched a share of their 11th straight league title and can clinch it outright with a win over Richmond Heights on Wednesday.

While Independence extended its conference winning streak to 124 straight matches, the focus on Thursday was on seniors Sammy Barther, Ava Marek, and Gracie Taliaferro.

“My time spent playing as a Blue Devil is going by quicker than I could have ever imagined,” said Barther, who began her career at Padua before returning to Independence as a sophomore. “You have to cherish every second spent with the team and growing together. They become your second family and it’s sad seeing time go by. Playing for the Blue Devils has brought out the true meaning of sports for me. It’s all about growing together, having fun, and making the most of your time spent. I couldn’t ask for a better team and second family.”

Marek has made the most of her first year in the varsity rotation.

“It is an honor to be able to play and represent my school in volleyball,” she said. “These four years have flown by and I have cherished every moment with my teammates. Playing volleyball for my school has created many memories that I will cherish forever. Once a Blue Devil, always a Blue Devil.”

“It was an amazing Senior Night,” Taliaferro said. “Every girl in this program put so much time and effort into making this an incredible night for us, and we appreciate them and their awesome parents so much. Time flies, that’s for sure. I was looking at my photo board and there was a picture from my sister’s senior night, and it literally feels like yesterday. Being a Blue Devil has been one of the greatest blessings of my life. It’s taught me discipline, teamwork, and grit. Being a member of the Independence volleyball program the past four years has made me realize how much I love the sport of volleyball. I will greatly miss the girls, the celebrations, the feeling after winning a point and winning a huge match, and all of the amazing memories. Luckily though, the chapter isn’t closed just yet. Now it’s time to get down to business, and enjoy the rest of the season.”

Independence hosts Lake Catholic on Saturday. The Cougars are ranked No. 1 in Ohio’s Division III.