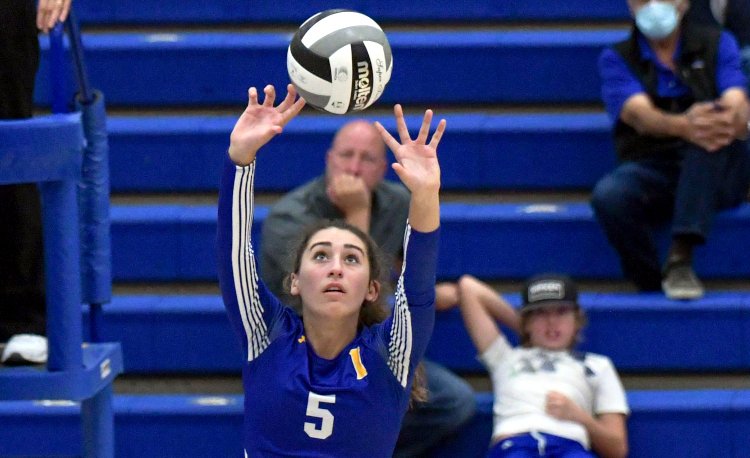 Independence celebrated its Senior Night with a dominating 3-0 win over Division I powerhouse St. Joseph Academy on Wednesday.

Independence, ranked third in Division III, has been on a bit of a giant-killing binge over the last week.

The Blue Devils beat Magnificat, ranked sixth in Division I, 3-1 on Sept. 29, and then traveled to Huron that following Saturday and beat the defending Division III state champions, 3-2.

Independence’s next big test came on Wednesday against the Jaguars, who are ranked fourth in Division I.

“Last week, Mags was our first test and I told them today, we’ve had three tests in a week now between Mags, Huron, and St. Joe’s, and based on all the rankings and everything, St. Joe’s was going to be the toughest test,” Messina said. “I said one thing when we were done and that’s all I’ll say until we play Brooklyn (on Thursday), A-plus.”

Messina’s high grade for his team was warranted following the way the Blue Devils executed the game plan, remained laser-focused, and controlled the tempo against the Jaguars.

“The key for us is to pressure teams like that,” Messina said. “They’re bigger than us so if we play a slow tempo game, we’re going to get pounded. We need to play at our tempo and continue to pressure them. Every time we tipped the ball back or didn’t get a good attack, they were on us. We had to keep serving aggressively, which we did well tonight, and we kept pressuring them. That’s the key and the girls did that well tonight.”

“The tempo was definitely a key to winning because they are a much bigger team than us with a bigger block spreading the ball around and getting my hitters in the best situation possible was key,” said senior setter Abby Avila. “It really helped us tonight that we had a huge student section and tons of fans for our senior night. We all played together as a team tonight and we really wanted this win. This was a huge win for us against a top-ranked team in Division I. We were definitely undersized versus them but our aggressive serves and getting them out of system helped.”

For Avila and the other Independence seniors, the night was even more special as their careers will soon come to a close.

That group of seniors—Avila, Callie Prokopius, Ava Moreal, Hanna Wilson, Macy McNamara, and Sadie Habeeb—have meant so much to the Independence program but have yet to win the biggest prize of them all.

The Blue Devils have finished second in the state for three consecutive seasons, so this year, they all are committed to doing whatever it takes to end their careers—and the season—with a win in the state championship game.

“It is definitely crazy that it was senior night and I was the senior this year,” said Avila, a four-year starter. “It still doesn’t even seem real. It was definitely a sad night knowing that my final season is coming to an end. I knew this was a huge game and I have been wanting this win for a while, so I put all my emotions aside and went to work.”

Avila and her teammates experienced their share of emotions on Senior Night but they flipped the switch and went to work against the Jaguars.

“Tonight, it was about the seniors first and that’s what I told them,” Messina said. “And then what I told them is there are a lot of people are out there and when we’re done with the seniors then the main event goes on and we go to work. Tonight, they responded and they were ready to go.”

Independence travels to Brooklyn on Thursday and then hosts another Division I powerhouse in Padua on Saturday.

October 14, 2021
Independence wasn’t at its best in Wednesday’s non-conference match at Crestwood but the Blue Devils grinded out a 3-0 sweep over the Red Devils.