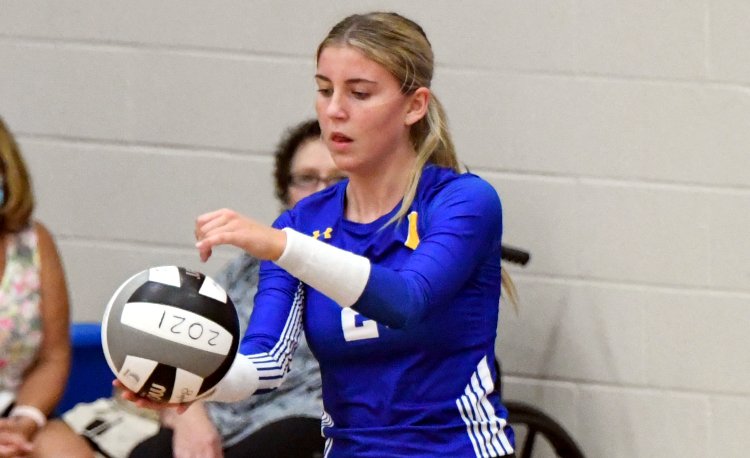 Independence faced its biggest test of the season in a non-conference match at Magnificat on Wednesday.

The Blue Devils aced that test by beating the Blue Streaks in a battle of state-ranked teams, 3-1. Independence entered the match ranked No. 3 in Division III while Magnificat was ranked No. 6 in Division I.

“I’m very happy with the girls,” said Independence coach Anthony Messina. “We battled in the first set back-and-forth and we edged them out and won set one. They basically rolled us out of the gym in the second. We got nine points and I didn’t know what hit us, but for them to come back in three, it was awesome, and then set four was back and forth and we pulled away a little bit. It was unbelievable. We played really well.”

Independence won the first set, 25-19, but Magnificat dominated the second, 25-9.

“All I told them is to wipe that from their minds, just forget it and start again,” Messina said.

Independence is now 4-3 against Magnificat since 2007 but the Blue Streaks had won back-to-back matches over the past two seasons.

“We knew Magnificat was not going to be an easy win,” said senior Callie Prokopius. “We have been preparing all season for a game like this. They brought a lot of intensity to their side of the court but we took care of business. It was definitely a big win for us and everyone on the team contributed to it.”

Prokopius did it all for the Blue Devils on Wednesday.

She served well, attacked the net, and dug out ball after ball.

“Calli Prokopius probably had the best overall night we’ve ever seen her play,” Messina said. “Callie was just everywhere. This was probably the best performance we have seen from her. She played awesome.”

Prokopius fed off the energy from her teammates.

“I work hard for my team and get my job done for them,” she said. “Everyone gave it their all tonight. I am really proud of my team tonight and couldn’t do it without them.”

“The key to offense was spreading the ball around,” Avila said. “They had a big block so getting my hitters with only one block was key. Our ball control and defense tonight was great. I couldn’t have spread the ball around without my passers giving me great passes. Everyone did a great job tonight. It was really a team effort winning this game.”

Junior Sammie Barther played a key role in Independence’s attack and junior Grace Taliaferro came up clutch in key situations throughout the match.

Independence hosts conference rival Richmond Heights on Thursday and then travels to Huron on Saturday for another matchup against a state-ranked team as the Tigers are ranked No. 8 in Division III.

Independence opens with win at Cardinal