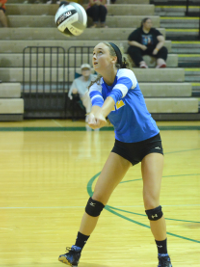 Independence knocks off No. 5 Huron

Saturday’s clash between undefeated Division III volleyball teams Independence and Huron was everything it was expected to be.

The only surprise might have been the Blue Devils edging the fifth-ranked Tigers, 3-2.

“That was a really huge win,” said Independence head coach Megan Osysko. “We did a great job of controlling ball, battling for points. These rallies were four or five times at least back and forth each time. The girls really played hard.”

“We actually were down quite a few points in the first match and brought it back,” Osysko said. “We did a really good job in the second match when the ball came back on our side. We brought it back to where it needed to be and controlled the ball. We took them a little bit out of their game.”

The third game didn’t end well for the Blue Devils.

“Honestly, I think we put that one on us,” said Osysko of Huron’s 25-14 win. “They didn’t really take us out of our game. It was just aggressive mistakes. We had some errors that added up and we couldn’t bring it back.”

With their backs against the wall in game four, the Blue Devils responded to overcome a 16-10 deficit and forced a fifth game with a 25-18 win.

Emily Magas and Megan Screptock were the driving forces behind the comeback win that game. Screptock ended the match with 24 kills while Magas contributed with 20.

“We were down again, 16-10, and we got on a couple of good runs and battled for points,” Osysko said. “Emily and Megan on the outside were just doing a great job of transitioning off the net. They were the ones putting the ball down. Everyone kept the ball off the floor in the back. It was an all-around team effort.”

The Blue Devils wouldn’t be denied in the fifth set. They won that game, 15-13, to stay undefeated.

“We wanted to take it five points at a time,” Osysko said. “We got to five before they did and then we got to 10 and then 15. I know the girls were exhausted but they just found something within them to keep playing and keep pushing each other. They did a great job and it was a huge win for the program.”

Led by Screptock with four and Victoria Sirna and Maura Collins each with three, the Blue Devils recorded 10 serving aces. Sirna led the team with four blocks and Mallory Trombetta dug a team-high 25 balls.