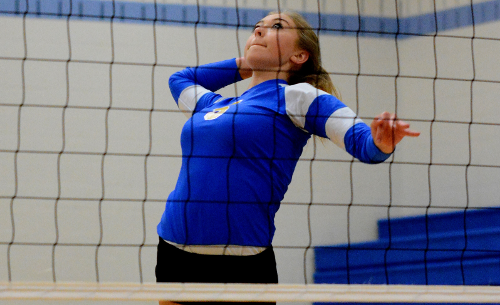 The reshuffling of the Chagrin Valley Conference saw Independence move up to the Chagrin Division, where the Blue Devils are off to a 2-0 start after defeating host Perry on Tuesday, 3-1.

“It was nice to play a bigger school,” said Independence coach Megan Osysko. “Perry was very competitive. There were tons of points back and forth. (Setter) Hallie (Zumack) had 99 attempts, so points were going back and forth. They were hard earned points. It was good to see the girls competing for points and coming out on top.”

The Blue Devils, who improved to 2-1 overall, were especially successful on the service line.

Maura Collins led the team with 14 service points while Mallory Trombetta had nine, Katie May had eight and Emily Magas and Zumack both finished with seven.

“It was really nice because there were a couple girls who got on some good serving runs,” Osysko said. “We were serving aggressively, which was good because we were keeping them out of system.”

“They had a great game on the outside and Lexi in the middle did well too,” Osysko said. “It was good for her to step up as a young freshman to see what she can do.”

“Each game the chemistry is getting better and communication is getting better,” Osysko said. “Those are things we want to keep working toward every single game so by the end of the season things just click.”