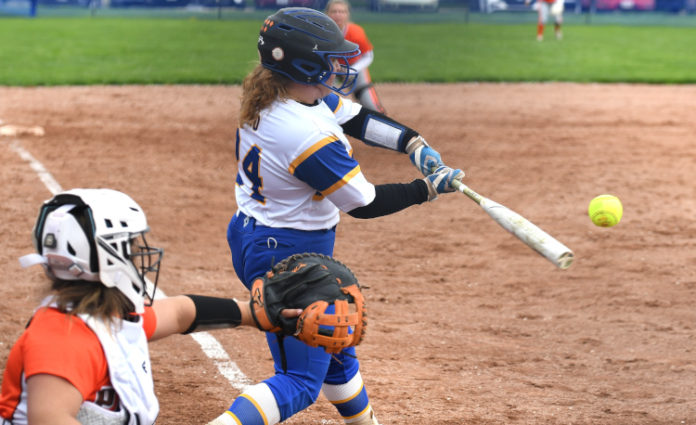 INDEPENDENCE—The Independence softball team made the most of its five hits and stingy defense in beating visiting Padua on Saturday, 6-1.

The Blue Devils saw pitcher Ashleigh Porter shut down the Bruins offense and Independence’s defense had its shining moments as well.

“My coach had confidence enough in my catcher and me with calling the pitches,” said Porter, who allowed just one run on four hits and struck out four without issuing a walk. “His confidence let me relax and trust my defense with anything I threw at the batters. We changed up my pitching pattern several times and my team adjusted very well and was ready for anything. When I do miss my spots, I trust that my team has prepared enough to be ready.”

Morgan Pascarella hit a one-out single in the bottom of the first and Porter followed with a double but the Blue Devils couldn’t push a run home.

That changed in the second when Sophie George reached on an error and Tiffani Niro hit a deep fly ball to center that was mishandled and allowed the Blue Devils to take a 1-0 lead.

Niro sparked a four-run rally in the fourth when she hit another fly ball to right and reached on an error. Alyssa Pallini drew a walk, and Pascarella reached on a fielder’s choice. Porter then singled and Natalie George reached on an error. Cat Rieger and Anna Weber hit back-to-back singles to push Independence’s lead to 5-0.

Padua recorded a leadoff single in the top of the sixth and scored two groundouts later but Independence responded with a run in the bottom of the inning when Sophie George drew a leadoff walk and scored on Niro’s sacrifice to close out the scoring.

“It truly is very exciting to be able to (push runs across), especially considering that I know a few girls and coach Dave Jesionek from Padua personally,” Niro said. “I knew I had to prove to them how I have grown in softball and it felt amazing to be able to do that in our great game today.”

Porter led the Blue Devils at the plate as she finished 2-for-2 with the double. She also was hit by a pitch, scored a run, and knocked one in.

Pascarella, Rieger, and Weber each finished with one hit and Pallini drew three walks.

Niro was 0-for-2 but she reached base twice on well-hit balls and also had the sacrifice.

“I was a little more anxious going up to the plate today than other games since I knew that this game was crucial for me personally and it was a big game for Independence softball as well,” Niro said. “However, I took a second and let all of that go and did what I have been taught my whole life and fought till the end. Since I have a few games under my belt, I do feel way more confident than I did the first few games of our season. I can definitely say that confidence played a major role in today’s game for me personally and I channeled that confidence. Confidence is something I truly feel comes with time and mine grew stronger and brighter today.”

With the win, Independence improved to 7-2. The Blue Devils host Trinity on Monday.