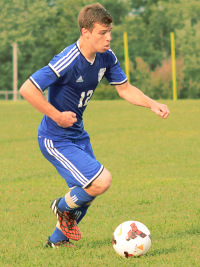 Independence’s soccer team bounced right back from Tuesday’s loss at Beachwood. The Blue Devils got started early and finished strong in a 5-1 win over visiting Villa Angela-St. Joseph on Thursday.

“It was good to see the boys bounce back from a loss at Beachwood,” said Independence coach Ryan MacRaild. “We knew going in we should command this game and we did. We talk about winning the games we are expecting to win, in my opinion is all of them, but on paper, we surely should outplay certain teams.”

Independence led 3-0 at halftime and never looked back.

“They have some strong players up front and made some adjustments in the second half, but with a 3-0 lead at half, they moved their best defender out of the back and offered us more of an opportunity to attack,” MacRaild said. “Their keeper had 16 saves, so we certainly took advantage. We were looking to put a few more goals in and let some reserves get some playing time in the second half.”

VASJ focused on marking Collins, who scored on a penalty kick. That left some openings for Independence’s other attackers.

“The scoring was spread out so well because they really focused on trying to stop Evan Collins who took advantage of good distribution opportunities and found Danny and Kevin streaking through their back line,” MacRaild said. “Christian Seif also contributed with a goal and an assist in his first start at midfield and may have found himself a new home. He has good creativity with the ball and made some great plays with his skill.”

Joe Bernstein recorded seven saves for Independence and Mike Wozniak (2), Collins and Seif all had assists.

“We had a good work rate and some home cooking was what the doctor ordered,” MacRaild said.

Dan Cervenik scored VASJ’s only goal late in the second half. Connor Gail recorded 16 saves for the Vikings.