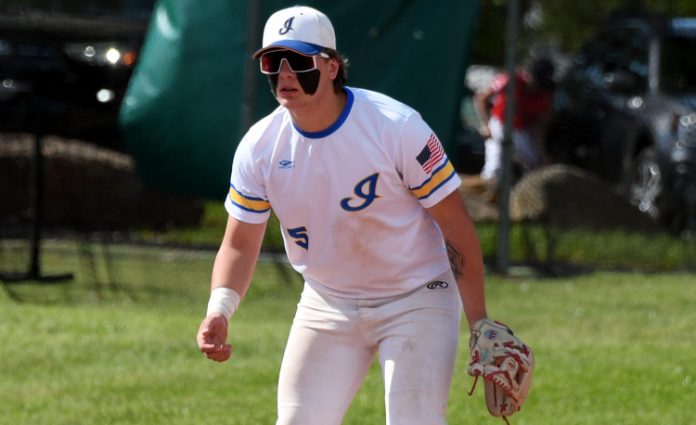 Ashton Lerz recorded three hits and struck out five in leading Independence to a 12-1 five-inning win over visiting Lake Ridge Academy in a sectional semifinal on Tuesday.

The Blue Devils, who improved to 12-8, will play at Mogadore in a sectional final on Thursday.

“It was a great first-round playoff win,” said Independence coach Jim Crooks. “Ashton Lerz came ready to deal and he dealt strikes and outs, and then our bats took over and we didn’t look back.”

Lake Ridge scored one run on a walk and a double in the top of the first inning.

Lerz locked in and held the Royals to just one hit the rest of the way.

“As a senior, and it being my last year, I am as zoned in as I can be because I want to go out of my senior year with a bang and I think we can make it happen,” Lerz said. “I think my key to success today was going into the game not thinking about who I was pitching or hitting against, but instead just focused on winning this to make it to the next one. That approach helped me to play free and loose and able just play my game.”

Independence tied the game in the bottom of the second when Evan Beacher led off with a single, moved to third on Cy Jolliffe’s single, and then stole home.

The Blue Devils broke the game open with a nine-run third.

Seven of the 13 batters the Blue Devils sent to the plate recorded hits in the inning and Independence also benefited from three Lake Ridge errors.

Mike Andryszczyk hit a triple and Lerz doubled in the inning.

Luke Pascarella doubled and scored on an error in the fourth and Jolliffe also crossed the plate to give the Blue Devils the lead they’d need to invoke the run rule after Lerz shut the Royals down in the top of the fifth.

“After the (Chagrin Valley Conference) title loss to Beachwood, we shifted our focus to compete in the postseason and I think we are locked in to make a run all the way,” Lerz said.

Andryszczyk and Jolliffe both recorded two hits in the win and Jolliffe, Charlie McGreal, and Dom Narduzzi each knocked in a pair of runs.

Casey McGhee was 1-for-4 but he scored two runs and knocked in another. He also had a solid game defensively.

“I have to give Casey McGhee a plug,” Crooks said. “He had a great game today. He was great in the field and had some really good at-bats for us.”

The fifth-seeded Blue Devils travel to No. 4 Mogadore on Thursday.

Kovalchuk powers Vipers 18U to 3-0 start