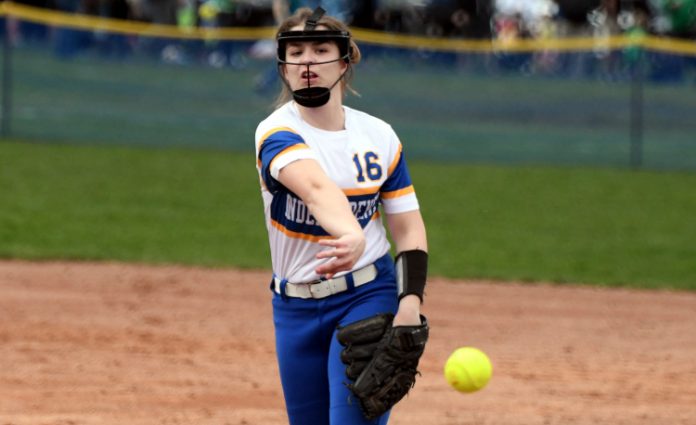 Ashleigh Porter hit a home run and struck out nine as Independence opened the postseason with a 3-1 win over visiting Wellington in a Division III sectional semifinal on Tuesday.

With the win, the sixth-seeded Blue Devils advanced to play at No. 2 Northwestern on Thursday.

“It was awesome,” said Independence coach Mallory Kobak. “Our focus since Sunday has been on Wellington. We studied them and practiced hard to make sure that we covered all our bases as it relates to what we thought Wellington was going to bring us and we ended up executing very well and coming out with a win.”

Wellington took a 1-0 lead in the top of the third inning on a solo home run but Porter and the Blue Devils didn’t panic.

“Ashleigh handled that very well,” Kobak said. “I think we all did. We knew it was only one run and we were prepared and we were ready. We knew we were going to need more than one run to win the game. It was nice that we were unaffected. We were very strong mentally and did what we had to do to come back and get the win.”

Porter evened things up with a solo home run of her own in the bottom of the fourth.

“Once I made contact I knew that it was a solid hit,” Porter said. “I didn’t realize it was a home run until I got to first base. I am so excited that I could contribute to the win.”

The Blue Devils took the lead for good in the bottom of the fifth.

Sophie George reached on an error and Natalie George followed with a single. Macy McGhee then hit an RBI single to give the Blue Devils a 2-1 lead. Natalie George scored on a passed ball later in the inning.

“We put a lot of pressure on them, even if they’re underclassmen,” Kobak said of her players stepping up in the clutch. “We expect the same thing out of them whether they’re a freshman or a senior. They know their roles and we have primed them for this moment since they were 10 years old. We expect them to do that.

Porter allowed just one baserunner in the final two innings.

She allowed just the one run on four hits and struck out nine.

“My spins were extremely on today,” she said. “I have been working outside of practice to really develop my pitches. Today, Paige (Priebe) and I figured out a routine that really lead to our success.”

Porter, Natalie George, McGhee, Tiffani Niro, Priebe, and Sophie George all had hits for the Blue Devils, who improved to 11-4 on the year.

“It was incredibly satisfying to see all of the hard work and time put into this season pay off,” Porter said. “I think our tough schedule has prepared us and I can’t wait for what’s to come.”