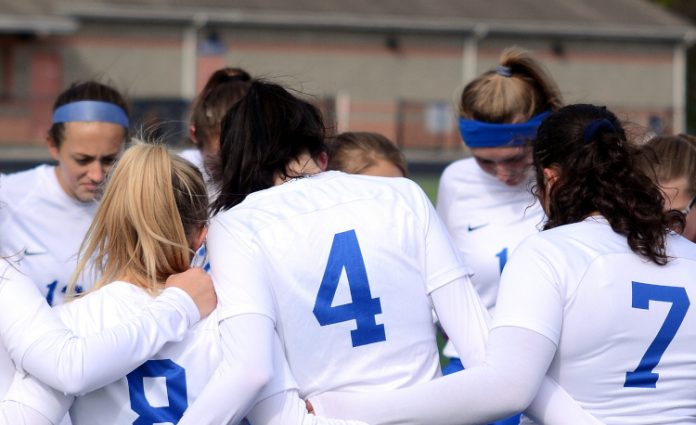 Alana Nowak recorded two assists in the win and Keely Sears posted the first clean sheet of the season for the Blue Devils.

“The two goals in the first six minutes really helped,” said Independence coach Bryan Less. “The girls worked hard. We only had 12 players and it was crazy hot and humid on the turf. We didn’t have a ton of possession, especially after the 22-minute mark, but we were defending well as a group and Alana and Alex (Adams) were putting pressure on their defense.”

Nowak set up Independence’s first goal when she delivered a well-placed cross and Casey Adams punched it in off of a volley just one minute into the contest.

The Blue Devils needed just five minutes to make it 2-0 when Nowak set up a finish from Mandy Kaufman.

Nowak scored 10 goals with five assists last season as a freshman. She moved to center midfield this year and made an impact in her first game at her new position.

“When I had the ball, I was just looking for how I could put the team in a position to score,” Nowak said. “Regardless of who puts the ball in the back of the net, I’m just looking for who has the best opportunity. I was looking to play fast and aggressive to catch the defense off guard, and I feel that my passes today got the job done.”

The Blue Devils were shorthanded with just 12 players but they battled through that challenge to pick up their first win of the season.

“Although we are short on numbers, the team is pretty tight-knit and we all get along really well,” Nowak said. “Everyone has been dedicated to getting better and learning throughout practice. Obviously, we always want to strive for a win and take care of business and that’s what we did in the first half today. The fitness of all of our players plays a key role in our success and I have seen tremendous growth since conditioning in June. Our numbers are capable of delivering wins as long as we keep up the fitness level and effort.”

Alex Adams closed out the scoring when she cleaned up a Bryanna LeRoy throw-in and found the back of the net with just 10 seconds remaining in the half.

“Alex was really good,” Less said. “She easily could have three or four goals. She made some really good shots that were a foot wide. She just couldn’t put one in. She made some great spin moves and went up the sideline and cut in but they just weren’t falling today until that one right before the half. It was good that she got one.”

Independence’s defense stepped up to protect Sears in the net.

“The defense did a good job,” Less said. “Keely came out and grabbed a couple of crosses and did what she had to do. She got some action in. This is only her second year of soccer, so she did a nice job. Jessica Harb had a nice game. She was matched up on their top player. She did a nice job of shutting her down.”

With the first win out of the way, the Blue Devils have 10 days to prepare for their non-conference home game against North Olmsted.

“It felt great to have the feeling of playing a real game again,” Nowak said. “We’ve had a few scrimmages get canceled because of rain and our game ultimately got cut short, but we made the most of our time and worked hard. I could see the team as a whole really working and pushing throughout the 40 minutes, and that was a great feeling.”