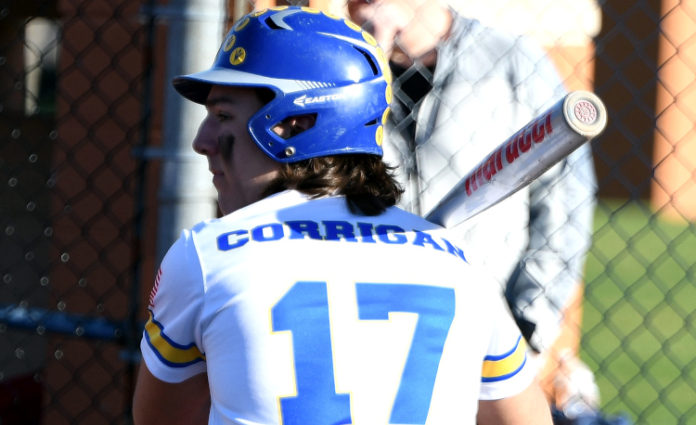 Independence pounded out 15 hits in a 19-8 win over visiting Wickliffe in a key Chagrin Valley Conference Metro Division game on Wednesday.

After dropping a 12-8 decision at Wickliffe on Tuesday, the Blue Devils needed a win to remain tied with Beachwood for first place in the conference.

“It was important for our team because it was a different experience in coming back to split a series,” said Independence coach Jim Crooks. “We lost the first game and it was important for us to experience the ability to come back and split and that was our goal after yesterday’s loss. Wickliffe outplayed us yesterday and we had to come back and split and that’s what we did.”

Wickliffe used a pair of doubles and a single to take a 2-0 lead after one half inning of play.

Independence responded with an eight-run inning.

Mike Andryszczyk and Casey McGhee drew walks to start the rally Connor Blum singled home one run. Ashton Lerz then walked to load the bases for Rory Corrigan, who singled to tie the game. Evan Beacher walked in a run and then Matt Richards doubled and scored on a groundout to give the Blue Devils an 8-2 lead.

Wickliffe came right back with two runs in the second and three in the third to pull to within 8-7.

“It was definitely a slugfest against a great hitting Wickliffe team,” Crooks said. “Your pitchers aren’t going to have their best stuff every night so you’re going to have to rely on other aspects of your game. That’s what we did today.”

Wickliffe tied the game in the fourth but Independence scored an unearned run in the bottom half of the inning to regain the lead, 9-8.

A 10-run sixth ended the game.

The Blue Devils collected five hits—including triples by Andryszczyk and Blum—to go along with five walks and a hit batsman.

Corrigan now has five hits in his last eight at-bats and is hitting .395 on the year.

“My approach at the plate was just to have confidence in myself and swing the bat like I can,” Corrigan said. “I was focused and eager to swing the bat.”

He was also inspired by the must-win approach his teammates used to put together big innings.

“It was really important to win for the split against Wickliffe if we want a chance at winning the conference this season and I think our team has a really good shot at winning it,” he said. “The key for today was energy. In yesterday’s game, we came out quiet and flat-footed. Today, we were loud, enthusiastic, and cheerful, and our batters really benefit at their at-bats if we are all cheering and yelling and that’s what we did.”

McGhee, Blum, Beacher, and Richards also finished the day with two hits for the Blue Devils.

The Blue Devils improved to 8-3 overall and 6-2 in CVC play. They’ll close out league play with a two-game series against both Trinity and Beachwood.