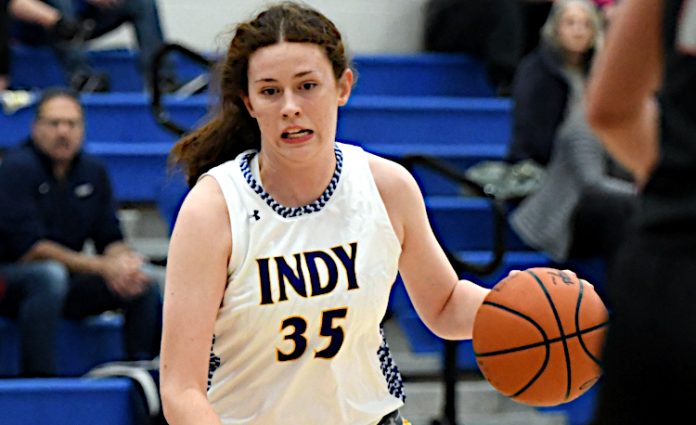 A late arrival and an early tip-off shook Independence but the Blue Devils regrouped and finished off Richmond Heights on Tuesday, 46-26.

The Blue Devils scored just eight points in the first quarter before scoring 17 in both the second and third to pull away from the Spartans.

“I know the girls were kind of out of sorts because the game started like a half an hour late, so the first quarter was a little subpar by our standards,” said Independence coach Mike Marcinko. “We kind of got off to a slow start but in the second and third quarters, we played pretty much like we wanted to at both ends of the floor in terms of pace, intensity, and efficiency. We defended well, got some run-outs and some easy buckets, and we hit some 3s.”

Natalie George scored all four of her points in the first quarter.

Kara DeSmith took the baton in the second quarter and scored nine of her 11 as the Blue Devils took control of the game.

Weber added eight points on a pair of 3-pointers and a field goal in the third quarter before the reserves took over.

“We started subbing midway through the third quarter and by the fourth quarter, it was all freshmen and sophomores,” Marcinko said. “They did a nice job but the varsity girls, the ones and twos, I was really pleased with how we followed the scouting report.”

Independence limited Richmond Heights to just three points in the first quarter, one in the second, and four in the third.

The Spartans, led by freshman Mya Johnson, scored 18 in the fourth quarter.

Johnson scored all of her team-high 11 points in the final eight minutes of play.

“We really slowed her down and I thought we just contained what they did offensively,” Marcinko said. “We got some steals and some buckets. I was really happy with our pace and intensity.”

The Blue Devils, who improved to 3-1 overall and 1-1 in the Chagrin Valley Conference Metro Division, head to Berkshire on Friday for a CVC crossover game.