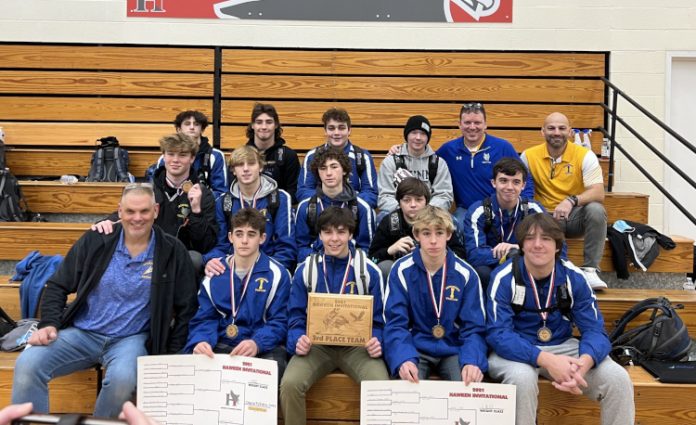 Independence won two individual championships and recorded 18 pins on the way to finishing third at the Hawken Invitational Tournament on Saturday.

The Blue Devils finished with 150 points. West Geauga won the tournament with 202 ½ points while Willoughby South was second with 151 ½.

“I was thrilled,” said Independence coach Ken DeAngelis. “To say we’ve had a rough start to our season would be an understatement. We had kids that didn’t come out that I thought would and some that came out and changed their minds, and we’ve dealt with injuries too, so it’s been really frustrating. We were looking forward to competing and getting a little bit of normalcy.”

Independence entered 11 wrestlers in eight of the 11 weight classes. Many were competing at the high school level for the first time.

The Blue Devils opened the tournament on Friday with a bang. Eight wrestlers advanced to Saturday morning’s semifinals and the team closed out the night in first place.

“We’re really young,” DeAngelis said. “I think my biggest class is my freshmen group and I’m down to I think two returning district qualifiers, so we’re really young and inexperienced but we caught lightning in a bottle on Friday. We had some nice draws and our kids performed well.”

Meyer recorded three pins and a 4-2 decision in winning the 120-pound bracket. Puklavec pinned all four of his opponents on the way to securing the 132-pound title.

“We knew they were going to be exciting,” DeAngelis said of his freshmen champions. “They were on our team when we restarted our youth team several years ago and I knew they would be the start of a nice little pipeline coming and, sure enough, they performed again. Two freshmen who have never wrestled a high school match and I think in eight matches they had seven pins and two championships; it was excellent.”

Meyer relied on his training and preparation to overcome the nerves he felt prior to the start of his first high school wrestling tournament.

“Luckily, my team has prepared me well for competition,” he said. “I feel much more confident going into future tournaments. I didn’t expect to come in and win the tournament. Winning the tournament is very exciting because it shows me my potential. I know I have things to improve on and will keep working at it.”

Meyer opened the tournament with three straight pins and then came from behind to beat Central Catholic’s Angel Bermudez in the championship match, 4-2.

Bermudez recorded a second-period takedown to take a 2-0 lead. Meyer escaped 16 seconds later and then scored a takedown for a 3-2 lead with 53 seconds remaining in the period.

“It was very important for me to score,” Meyer said. “It gave me confidence that I was going to be able to go into the third period ahead.”

Meyer rode Bermudez from the top position for the rest of the period and then he chose to start the third period in the down position.

He recorded an escape with 21 seconds left in the match and ran out the clock.

“In the third period, I took the down position knowing that I had escaped once and I would be able to escape again, giving me a 4-2 lead,” he said.

Puklavec opened the tournament with a 24-second pin and flattened two of his four opponents in the first period. The other two didn’t make it out of the second.

“The entire team exceeded expectations,” DeAngelis said. “We put four in the finals and everybody on the team won a match, so it was exciting. Everybody got in the win column after the first weekend and we’re just excited to get back on the mats on Monday.”

Independence will host the North Coast Classic on Friday and Saturday.