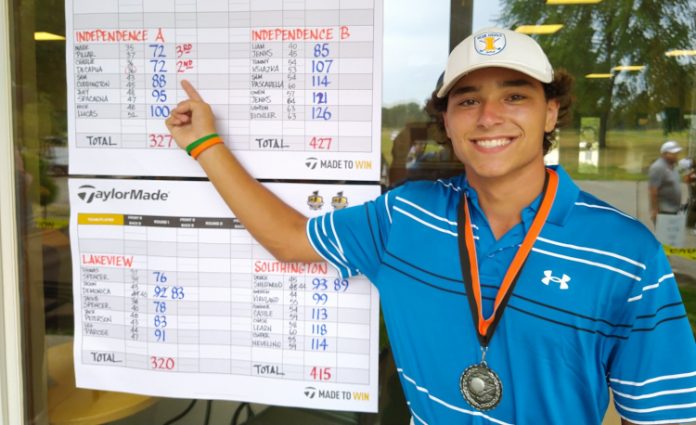 Independence opened the season with a third-place finish at the Howland Invitational on Thursday at Old Avalon Golf Course.

Charlie DeCapua and Mark Pillar both shot 72 to tie for second place. DeCapua earned the tie-breaker to finish as the tournament runner-up.

“It was nice for the first time out,” said first-year head coach Ryan MacRaild. “Four of our five guys that were starting were seniors, so it was nice to get them all out there together. It was a good first tournament. It kind of gave us a taste of how things are going to go and it got us ready for Monday’s CVC showcase.”

Sam Coddington finished with an 88 and Joey Spacagna closed out the scoring with a 95 to lead the Blue Devils to a 327 as a team, good for third place overall.

Nick Lucas also competed. He finished with an even 100.

Independence’s JV team also competed with some strong scores from Liam Jenks and Tommy Ksiazka, who carded an 85 and a 107, respectively.

“It was really nice because we were able to take the JV squad and a couple of them really came through today,” MacRaild said. “Liam shot an 85, which I was not expecting. That will put him into contention for the top four, five, or six on the varsity squad at some point. It was good to see some of the young guys get out there and compete.”

The Blue Devils next compete at the Chagrin Valley Conference preseason tournament on Monday.

Blue Devils bounce back with win over Chagrin

September 4, 2020
Independence struggled on the course in a loss to Aurora on Wednesday but the Blue Devils bounced back with a 174-207 win over Chagrin Falls on Thursday.