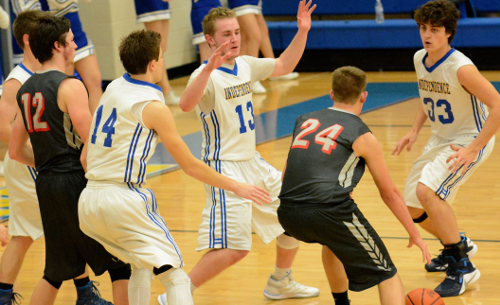 Independence pulls away from Cardinal for first win

INDEPENDENCE—Through five games of the 2015-2016 season, Independence struggled to put together a complete game and that resulted in an 0-5 record.

On Tuesday, the Blue Devils came close to putting it all together and beat visiting Cardinal, 53-38.

“Sometimes when you go 0-for at the beginning it’s tough to get the monkey off your back,” said Independence coach Hugh McMahon. “Our guys had really raised their level of play each game and we played some of the toughest teams we’ll play all year in our first five games of the season, so it was great to see them carry that on and learn from it. Our intensity was excellent the entire game. It’s still early that I don’t think we’ll play a clean game until we get some more games under our belt but I’m very proud of the intensity. As long as we continue playing that hard good things will happen.”

They never let up in winning their first game of the season.

He hit from all over the court and finished with two 3-pointers.

“That’s the game we all needed,” McMahon said. “I’m so happy for him because for three years he’s been up with the varsity and this is his third year and we’re asking him to step up and he’s been pushing himself this year. It’s been frustrating because he hasn’t seen the results. Tonight he was the best player on the floor and he showed that every trip. If something went wrong he didn’t get down. He came back and played hard the next trip. That’s a great sign of maturity and that’s what it’s about.”

“We really broke down the last few games and we just never ran offense,” McMahon said. “We went too early, we didn’t reverse the ball or throw it in the post, so once we started actually running some offense we got better shots and there’s a greater likelihood of those going down. That led to us being more confident as it went on so when we found openings we felt more comfortable shooting. It’s a lot easier to shoot when you’re ahead and we’ve been behind quite a few times. These guys found some rhythm tonight and they looked for each other in spots where we wanted them to get the ball. They created some of their own shots too, which is a great for us.”

Independence next plays at Cuyahoga Heights on Friday while Cardinal hosts the Redskins on Wednesday.