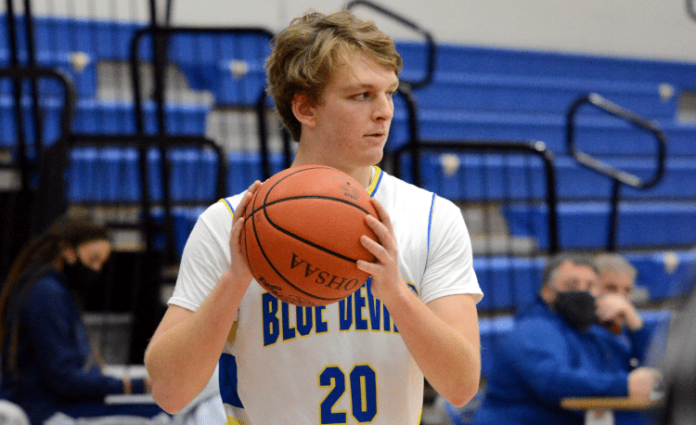 After suffering back-to-back losses in games decided by one possession, Independence left nothing to chance in a 65-39 win over visiting Cardinal on Thursday.

The Blue Devils used big runs in the first and third quarters to pull away from the visiting Huskies.

“It was great,” Independence coach Kyle Johnson said. “We didn’t handle the pressure real well early. They did a nice job in their zone of coming and creating pressure and we didn’t do a great job but we made some adjustments. Our kids are really smart basketball players when you put them in the right position and they go out there and don’t miss a beat. It was a total team effort. All 13 guys got in the game and did a great job.”

After a back-and-forth start to the game, the Blue Devils finished the first quarter out in front, 18-13. A second-half run increased the Blue Devil lead to 37-24 at the break.

“We kind of challenged them at halftime,” Johnson said of his players. “We were up 13. We told them coming out in the first three minutes, we wanted to be up 18 to 20. We always preach to our kids that first two or three minutes of the first and third quarter are very important because that sets the tone of the half. We did that tonight. After the first four minutes, we were up 20, so we kind of went from 13 to 20 and set the tone for the first couple of minutes and we kept that up the rest of the game.”

Independence outscored Cardinal in the third quarter, 14-5, then cruised through the fourth quarter to even its record at 2-2 this season.

Led by Kyle Zygmunt, who scored a game-high 15 points, and Adam Miklovic, who finished with 10, Independence had 10 players score at least two points in the game.

“Our team is very unselfish,” Johnson said. “I thought we passed the ball very well. We were able to move the ball and get reversals. Like I said, we’re very unselfish. Our guys are all willing passers and we got great ball movement and made the right play.”

Ramm’s performance was especially fun to watch as he’s been one of the team’s inspirational leader on and off the court.

“Aaron Ramm came in tonight, our senior forward, and he got a few buckets and played great defense tonight,” Johnson said. “He’s the kid that’s always bringing energy in practice and games, whether he’s playing or not. He’s the ultimate teammate and he did a great job tonight.”