Independence pulls away from Trinity 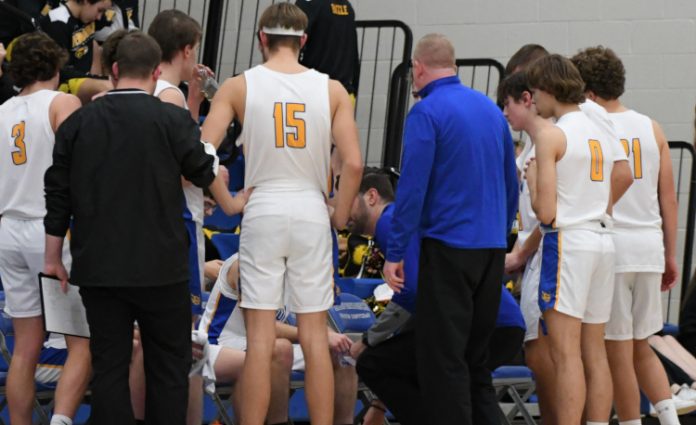 In a game of runs, Independence pulled away from host Trinity in a 67-57 Chagrin Valley Conference Metro Division win on Tuesday.

The Blue Devils held a double-digit lead and then was forced to come from behind after the Trojans rallied to take a one-point lead in the second half.

“I think we’ve played pretty well the past two games on the defensive end but we have to keep preaching to guard people when the shots aren’t falling,” said Independence coach Kyle Johnson. “We’ve got to a much better job of that.”

Kyle Zygmunt scored seven of his game-high 24 in the period and Casey McGhee and Aidan Coljohn both hit 3-pointers to spark the Independence run.

Trinity’s JayQuan Stubbs found his stroke in the third quarter when he scored 14 of his 21 points. That helped the Trojans erase a double-digit lead to take a one-point lead late in the period.

Independence weathered that storm and led, 46-43, heading into the final eight minutes.

“We got it up to 11 in the third quarter and then they actually went up one on us,” Johnson said. “We were able to string together a nice run and we sustained that for the rest of the game. I was proud of how the guys finished.”

Zygmunt added 9 points in the third, Coljohn pitched in with six more, and McGhee drained a 3-pointer down the stretch.

“We did a much better job and we had four straight shutdown possessions,” Johnson said in response to Trinity’s run. “That was huge for us to get four stops in a row and then be able to convert those into points.”

“He came out in the first quarter and had to big 3s to kind of get us going,” Johnson said. “He knocked down a few shots and Kyle has been productive and he really turned up the intensity.”

Kovalchuk powers Vipers 18U to 3-0 start