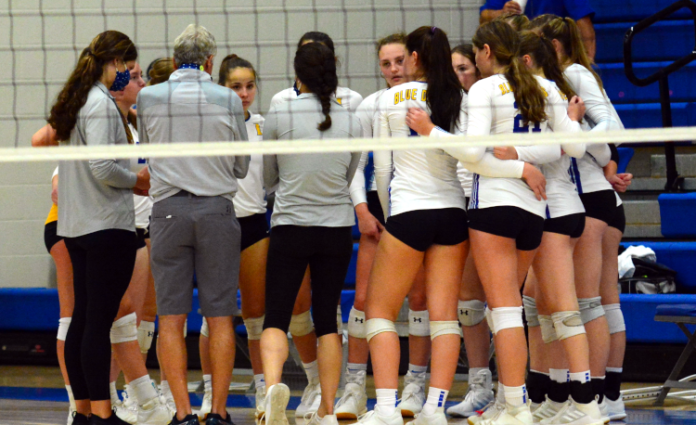 In its home away from home, the Independence volleyball team swept Smithville on Saturday in a Division III regional championship game at Barberton High School.

With the 25-19, 25-12, 25-19 win, the Blue Devils won their fourth straight Barberton Regional championship and will play in the state Final Four for the fourth consecutive season.

“It’s awesome,” Independence coach Tony Messina said. “The girls have worked hard and they played well together. It was another great team effort. To get back (to state) is unbelievable.”

Independence put together long scoring runs and made it difficult for the Smithies to respond.

The Blue Devils jumped out to a 9-1 lead in the first set and saw that lead grow to 20-8 before Smithville put together its best run of the match. The Smithies pulled to within 21-17 before the Blue Devils finished off the set.

In the second set, Independence was up 20-7 and was never threatened in closing out the match.

“Our game plan was to serve aggressively like we do and pressure them where we attack and make them play from the back row,” Messina said. “They had two very, very good middles and a good setter. When we weren’t attacking, that’s when they were getting the ball to the setter and doing damage. A couple of times, where they came back on us, we were able to control the ball and put some pressure on them and get back in control of those sets. It had a lot to do with the girls really taking care of the ball on our side of the net and pressure the other team.”

The Blue Devils, who improved to 24-3, advanced to the state semifinals at Vandalia Butler High School in Dayton, where they’ll play a familiar foe in Tuscarawas Valley.

Independence beat the Trojans back on Sept. 5, 3-0, but Messina and the Blue Devils are playing a quality opponent that has improved since that early matchup.

“That was a long time ago,” Messina said. “They have gotten a lot better since we played them so we can’t even go back to that. That was a Saturday morning early in September when we went down there and we played pretty well and they didn’t. It’s November now and it’s playoff time, so it’s all different. The mindset will be that it’s Tusky Valley in November, not in September. They’re very well-coached and a very good team.”