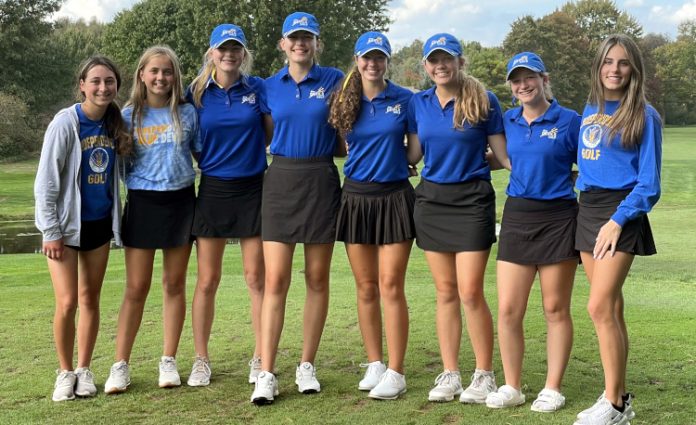 Independence finished third at the Division II Sable Creek District tournament on Wednesday to earn another trip to the state championships.

The Blue Devils, who shot a 373, will compete at state for the fourth time since the program began in 2014.

“Every year has its own story,” said Independence coach Karl Schuld. “We never really start over, we always have a good nucleus coming back, but this team is so young and they just put their nose to the ground and went at it this year. Across the board, everybody from 1-8 for us has contributed to our team in some way.”

“The story this year is that we graduated our No. 1, No. 2, and No. 3 girls in a school that has about 40 girls per grade, in a school that has a tremendous volleyball program, a very competitive soccer program, and a solid cross country program, and somehow, someway, these girls come out and produce,” Schuld said. “It amazes me at how successful not only is our girls’ golf program but across the board how successful Independence is in girls’ sports. It’s insane.”

On top of their inexperience, Independence and the rest of the district qualifying teams and individuals had to deal with a very long and challenging Sable Creek course. Scores from the Sable Creek District, on average, were 8-10 strokes higher than the other Division II districts across the state.

Hillary Esper led the Blue Devils with an 89, good for 14th place overall.

“I was extremely satisfied with my round today,” Esper said. “I haven’t been putting up the scores that I want lately and to just step up and put down a great score at the right time is a great feeling. Sable Creek is also a difficult course, so to shoot an 89 is just exciting for me.”

Esper has been a solid contributor to the team all season but she hasn’t been at the front of the pack often.

“It feels great to know that my score helped a lot today to get the team where we needed to be,” she said. “My teammates and coach have both given me a lot of encouragement over the last couple of weeks and it really showed in my round today. It’s very exciting to have made it to states again; I know we’re all really proud of each other.”

While she’ll be making her first trip to the state tournament, Esper has learned a lot about what it takes to be successful on the biggest stage from her teammates past and present.

“I talked with Molly, Emma, and our three graduated seniors last year about the state tournament and I think I am as mentally prepared as I can be without having actually played the course,” Esper said. “Overall, however, going to states is a great experience no matter how you do, and I think we all really just want to go down there and have some fun.”

McGreal and Konopa both shot 90 and Kate Coljohn rounded out the Independence scoring with a 104. Macey McGhee also competed and finished the round with a 115.

“It feels amazing to have another shot at the state tournament,” McGreal said. “I am so proud of how far they have come and how well they played today.”

McGreal, who placed 48th at state last year, wasn’t pleased with her score.

“I started off well but during the middle of my round, my scores got higher,” she said. “I was able to come back at the end but my score was still higher than I would like. I had a few bad holes but I always trusted my team and knew they would pull through.”

Off the tee, McGreal was solid but she struggled with her mid-range irons and that left her with several more strokes than normal.

“I felt like my approach shots and low irons were all over the place on my bad holes,” she said. “I just remembered to focus and stay calm and not let one bad shot lead to another one.”

For McGreal and Konopa, last year’s state experience will help them deal with the nerves and anxiety that come with playing in such a prestigious tournament.

“Last year at state, I got used to the course,” McGreal said. “Experience on the course will definitely help my score this year. I am so excited to have yet another opportunity to play at the state tournament. Last year, I had an awesome time and my scores ended up turning out pretty good.”

Three of Independence’s five starters will make their first appearance at the state tournament.

Regardless of what happens on Ohio State’s Gray Course, the Blue Devils are gaining valuable experience they can use next season when all five return.

“We are extremely happy with them getting them down to state because it gives them experience for what we think could be a special year next year,” Schuld said. “We thought this would be a good way for everybody to do some more bonding and go down and have one more week of fun. It’s never good to end a season at districts. It almost feels like a loss, it’s disappointing, so when you end your season at state, it feels like the climax of the season is in the right spot.”

Qualifiers: Top 3 teams and 3 individuals not on a qualifying team.

August 12, 2020
Independence’s girls’ golf team once again turned in a strong performance with a fourth-place finish at Magnificat’s Blue Streak Invitational at Sweetbriar Golf Club in Avon Lake on Tuesday.