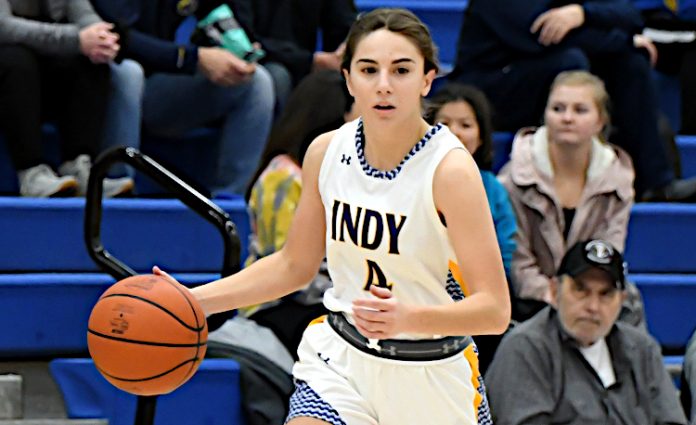 Independence used a third-quarter run to pull away from host Crestwood on Friday and went on to beat the Red Devils, 53-44.

With the win, the Blue Devils extended their winning streak to seven straight games.

“That was a good test for us,” said Independence coach Mike Marcinko. “You’re on the road against a solid opponent with a big and a good point guard and shooter, and we expected them to play hard.”

“I don’t know if it was the bus ride or being on the road, but that kind of hurt us early,” Marcinko said. “We weren’t really paying attention to detail. Halftime couldn’t come quick enough for us.”

The Blue Devils woke up in the second half and outscored the Red Devils in the third quarter, 14-2, and played Crestwood even in the fourth to seal their eighth win of the season.

“Defensively, I thought we played much smarter,” Marcinko said. “We played hard in the first half but we didn’t play as smart. We didn’t mix in people well or communicate well. In the second half, that totally changed and the girls picked it up and knew what to do.”

Natalie George and Anna Weber both scored a game-high 16 points to lead the offensive charge for the Blue Devils.

“It was super rewarding to score big and push the team towards another big win,” George said. “We keep putting up a good fight, which ultimately makes us stronger going into these next couple weeks. This team really has had some major growth (this season). Players are really stepping up when they need to and it helps us get the job done, but our work isn’t over just yet. I really hope we can ride this wave and keep this streak going forward.”

Crestwood’s first-half success started on the boards. The Red Devils outrebounded the Blue Devils, 31-17 in the game.

“I thought they outhustled us on the boards a little bit,” Marcinko said. “That’s just the way it presented itself. They shot some 3s and got some long rebounds. There were a lot of balls that hit the floor and got deflected off the rebound, and they got them. Whether they got the first miss or the second miss, we had to defend multiple times. That’s something we’ve got to work at.”

After starting the season 1-1, Independence is now 8-1 with several key games quickly approaching, including one against Trinity on Wednesday.

“If we learned anything from this game it’s that playing harder and with more grit is going to get us a win,” George said. “Playing aggressive but under control is what we need to focus on. We can really use the push from this game to put up a good fight against Trinity.”