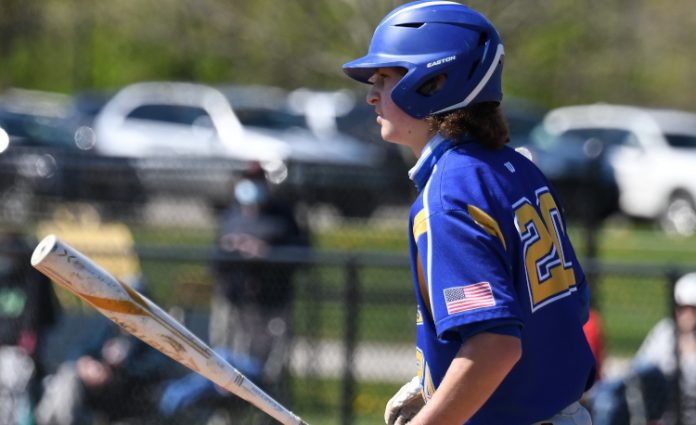 Independence rallied back from a 5-0 deficit to beat visiting Lutheran West on Wednesday, 10-8, to earn a season split with the Longhorns.

“Our goal going into today was to split with Lutheran West and, obviously, they’re a really good team,” said Independence coach Jim Crooks. “What we did today was competed and hit the ball.”

The Longhorns scored five early runs off of Independence starter Ashton Lerz in the first two innings with the big hit coming off the bat of Zack Keller, who hit a three-run homer in the second inning.

“Lerz didn’t have his best stuff on the mound but today was a great example of how he kept it close for us to compete and then our bats took over,” Crooks said.

Lerz allowed just five earned runs on seven hits and he struck out five in five innings of work.

Mike Andryszczyk closed out the game for the Blue Devils. He threw two scoreless innings and allowed just one hit with one strikeout.

“Mike came in and shut the door on the mound,” Crooks said. That was a big performance from him in a close game and against a top team in the conference like Lutheran West.”

Rory Corrigan led off the Independence half of the second inning with a single and he scored on Cy Jolliffe’s double to pull the Blue Devils to within 5-1.

The Longhorns responded with a run in the top of the third to push their lead to 6-1.

Independence rallied for four runs in the bottom half of the third.

Andryszczyk hit a one-out single to start the rally and Casey McGhee followed with a single. Lerz hit an RBI single to cut Lutheran West’s lead to 6-2 and then Evan Beacher hit a three-run shot to cut the lead to 6-5.

“It was a great feeling to be able to see all the hard work pay off,” Beacher said. “I knew there were runners on second and third and two outs and I needed to get them across the plate. The pitch was a low middle pitch with a 2-0 count and I just barreled it up and it kept sailing. When it first came off the bat I initially thought it was a gap shot, but then I saw the outfielders on the wall and heard my teammates cheering. It seriously couldn’t have been a better feeling and I can’t wait to continue this season with these boys.”

Lutheran West scored two unearned runs in the fourth but the Blue Devils scraped across five runs in the bottom half of the inning to close out the scoring.

Luke Pascarella and Charlie McGreal hit back-to-back singles to open the inning and Andryszczyk hit a one-out double to pull the Blue Devils to within 8-7. McGhee singled home the tying run and then Corrigan hit a two-out homer to give the Blue Devils the lead for good.

“Rory Corrigan and Evan Beacher both hit home runs and that lifted the morale,” Crooks said. “I think the hitting became contagious.”

The home run was the first for Corrigan at the high school level.

“I am so glad that it was what put us ahead,” Corrigan said. “I saw a fastball, inside. I anticipated it. He was throwing a lot of off-speed, so I knew it was coming, and it was my ‘happy pitch.’ It makes the win that much more special. We knew we had the ability to beat these guys, we just had to fix our mental game and we did. Our bats got hot when we needed them to, and we got runners home when we needed them to.”

Andryszczyk, McGhee, and Corrigan each had two hits for the Blue Devils, and Beacher led the team with three RBI.

“It was a big game for us,” Crooks said. “We didn’t hang our heads, we competed, we decided we were going to stick around and not let the game get away from us and fight back with a run or two here and there, and then we had a couple of innings with a couple of runs and Mike Andryszczyk came in and closed the game out for us.”

Independence improved to 3-3 overall and 3-2 in the Chagrin Valley Conference Metro Division. The Blue Devils travel to Berkshire on Thursday.