Independence ready for another run at state title 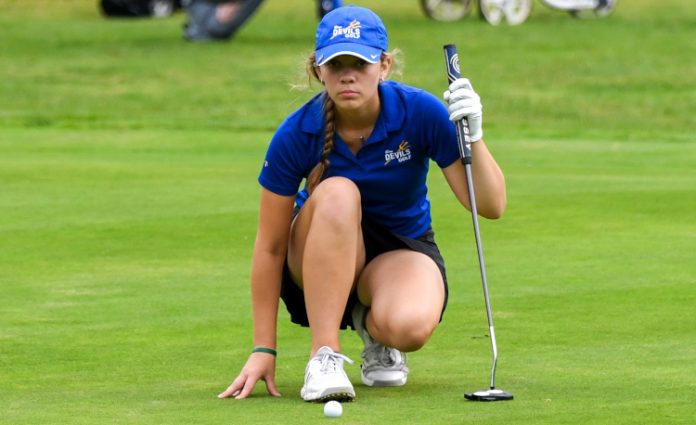 With its top 10 golfers returning from last season, Independence’s girls’ golf team is loaded and ready for another run at the state title.

“This is the deepest team we have had since we started the program nine years ago,” said Independence coach Karl Schuld. “The top 10 players all return and it should make for some fantastic competition. We have a great group of girls and they have worked very hard this offseason through weight training, golf lessons, tournaments, and of course, long hours of practice.”

Despite the loaded roster, Schuld knows the Blue Devils have their work cut out for them in defending their Chagrin Valley Conference Chagrin Division title and achieving their state goals.

“Chagrin Falls and Hawken are two of the best teams in Northeast Ohio and Cuyahoga Heights, Lutheran West, and Orange will all be improved this year,” Schuld said. “The girls know it will be difficult to reach their goals but hopefully their hard work will pay off in the end.”

McGreal shot an 82 and a 91 in placing 28th at the state tournament last fall.

“No one on our team played more tournament golf this summer than Molly,” Schuld said. “She had a fantastic summer prep and she has had the opportunity to play with some of the best players in Northeast Ohio. Her confidence is at an all-time high and she is hoping to take another step forward this season.”

Konopa carded an 88 and a 96 at the state tournament.

“Emma serves as one of our two captains and is now entering her third year on our varsity,” Schuld said. “She is one of our most consistent players. She has the ability to post some real good scores. She has worked hard this offseason and played a ton of tournament golf this summer and that should pay off this fall.”

Esper shot an 81 and a 103 at the state tournament to tie Konopa for 44th place overall.

“Hillary is one of our two captains and she came on very strong last year and shot her season low of 81 at the state tournament,” Schuld said. “She shot a 78 earlier this summer and has consistently scored in the 80s this tournament season. We are looking for a big season from Hillary this year.”

Coljohn shot a 102 and a 100 at state while McGhee shot 98 in both rounds. McGhee was a second-team All-CVC honoree while Coljohn earned honorable mention honors.

“Kate came on late for us last year. She was one of the key reasons we qualified for state. She has worked hard this offseason to improve her game, and I believe the best is yet to come in regard to her golf game,” Schuld said. “Macey is a tremendous athlete and is just starting to understand the game of golf. She played a lot of tournament golf this summer and I believe it will help her this season.”

“Adriann participated in many summer tournaments and saw great improvement over the past few months,” Schuld said. “She was the alternate on our state team from last year. Her confidence level seems to be at an all-time high.”

Trombetta and DeCapua have the potential to break into the varsity lineup.

“Bel began playing golf last year and has improved in all areas of her game. She is a super hard worker and had a fantastic summer shooting in the 80s in several tournaments around the area. She has worked very hard this offseason to win a spot on the varsity,” Schuld said. “Maria has worked so hard this offseason. She has put in hours of practice to improve. She participated in several tournaments this summer. She will be a fantastic player when her short game catches up with her drives. We look forward to watching her improve this season.”

Juniors Callia Shumay and Katie Dailey will compete in the sport for the third season and Schuld expects both to take strides this season.

“This team is a special group. They are all individually motivated to succeed which of course will lead to a strong team,” Schuld said. “I think the key for this season is to stay in the moment and not get ahead of ourselves. The season is long and it will have many ups and downs, we just have to remember to stay confident and continue to work hard.”

With five returning starters, the South boys’ golf team is eager to hit the course this season. They’ll do so with some lofty goals.