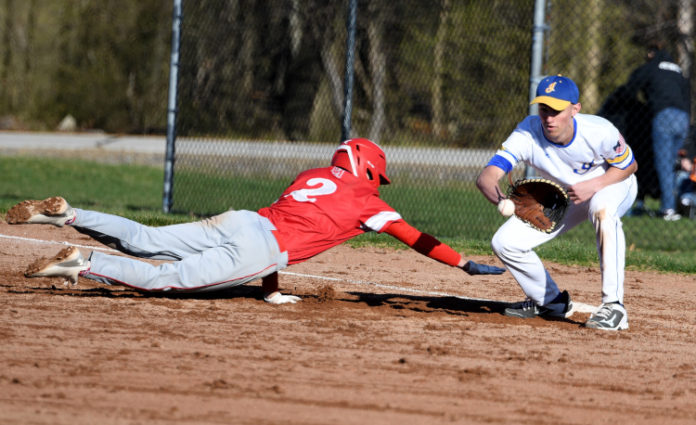 INDEPENDENCE—The Independence baseball team got off to a fast start in its season opener against rival Cuyahoga Heights on Monday.

The Blue Devils scored three runs in each of the first two innings and went on to beat their guests, 8-1.

With a six-run cushion, starting pitcher Ashton Lerz did the rest.

Lerz picked up the win after allowing just one run on six hits and he struck out six.

“Credit to our starting pitcher, Ashton Lerz, he threw strikes,” Crooks said. “He got guys out and got ground balls. He did a great job on the mound for us.”

Mike Andryszczyk got things started for the Blue Devils in the bottom of the first when he singled to lead off the inning. Casey McGhee’s single put runners at the corners and Connor Blum reached on an error to give the Blue Devils a 1-0 lead.

Lerz reached on a fielder’s choice that scored McGhee and then he scored on Evan Beacher’s single. Beacher was thrown out trying to advance to second on the play.

Cuyahoga Heights scored a run in the top of the second on a walk and two singles but the Blue Devils responded with three more in the bottom half of the inning.

Richards reached on a fielder’s choice, Cy Jolliffe singled, and McGhee singled home both runners. McGhee would later score on an error to increase Independence’s lead to 6-0.

The Blue Devils closed out the scoring with two runs in the fifth.

Beacher led off with a double and he scored on a Richards groundout. Jolliffe then singled with two outs and scored on Andryszczyk’s double.

“We set a goal to win each inning and if you look at the scoreboard, we won more innings and we split two times with them,” Crooks said. “We had a game plan and they executed the game plan. It was a good victory; it’s always a good victory over Cuyahoga Heights.”

Lerz pitched out of a bases-loaded jam in the second and he also stranded two Cuyahoga Heights runners in the fourth and fifth innings.

Blum struck out the side in the seventh to end the game.

Andryszczyk, McGhee, Lerz, Beacher, and Jolliffe each finished with two hits for the Blue Devils. Rory Corrigan had one hit but was masterful behind the plate with several key plays.

“Rory is a great catcher,” Crooks said. “He’s gritty and hard-nosed. He came out and caught a pop fly and stuck a play at home plate. He’s a gamer and he’s the kind of guy who wants those plays coming his way. It’s always fun to watch Rory play.”