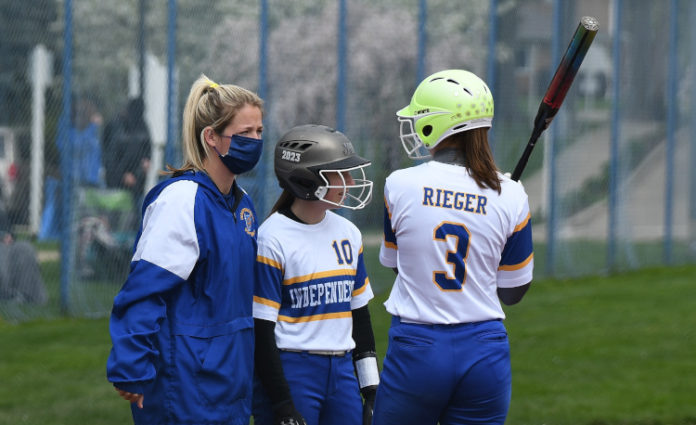 Independence racked up 17 hits, including seven that went for extra bases, in a 20-3 Chagrin Valley Conference victory at Trinity on Monday.

With the win, the Blue Devils improved to 8-2 overall and 3-1 in the Metro Division.

“Our teammate’s energy feeds all of us to have more confidence to hit the ball,” said junior Anna Weber, who finished the day 3-for-4 with a double and three runs batted in.

The Blue Devils jumped on the Trojans early as they scored five runs in the top of the first inning.

Alyssa Pallini was hit by a pitch and Morgan Pascarella doubled. Ashleigh Porter then walked and Cat Rieger singled. Natalie George tripled to clear the bases and scored on Cayla Mazzola’s single. Sophie George also singled in the inning.

An error and a walk set the table for Rieger in the second and she delivered with a double.

Rieger finished the game 3-for-3 with two doubles, a sacrifice and five runs batted in.

“It was very thrilling to finally hit today as I’ve been working very hard and making my adjustments,” Rieger said. “I guess my adrenaline from my hits kept me going. The key to my success at the plate today was not overthinking and receiving high intensity from my amazing teammates on the bench.”

The Blue Devils added seven more runs in the third on hits by Pallini, Weber, and Mazzola, who doubled, as well as three Trinity errors.

A five-run fifth allowed the Blue Devils to invoke the run rule.

Tiffani Niro led off that inning with a single and Pallini, Porter, and Weber also hit singles in the inning. Pascarella and Rieger both doubled.

Both Weber and Rieger finished with three hits after struggling at times this season.

“What was key, was just taking my time because the pitcher would wind up before I got in the plate,” Weber said. “Always being ready is key.”

For Rieger, a freshman, game experience has contributed to her run of success.

“Coming in, I didn’t know what to expect,” Rieger said. “In every success I have, I owe to the girls on my team and my coaches because they have made softball such a welcoming, enjoyable experience for me, and they have helped me grow so much.”

Pallini, Pascarella, Mazzola, and Niro each finished with two hits for the Blue Devils.

Porter allowed three earned runs on 11 hits and she struck out five.