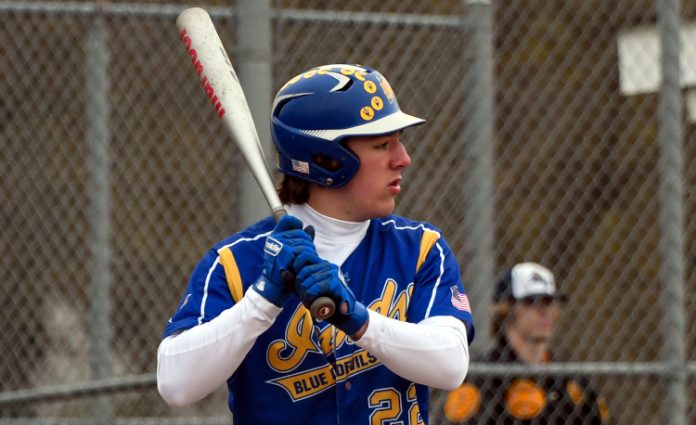 A loss to Beachwood on Wednesday wiped out Independence’s hopes of defending its league title. The Blue Devils responded with a five-inning 14-4 win at rival Cuyahoga Heights in their league finale on Thursday.

“It was a good way to close out the conference schedule,” said Independence coach Jim Crooks. “It’s always good to get a win against our rivals.”

Independence responded with 13 runs on eight hits and seven walks. Casey McGhee and Rory Corrigan both doubled in the inning.

“We swung the bat very well,” Crooks said. “We batted around the lineup and Rory Corrigan led the charge, as he has all season offensively. Evan Beacher had a couple of hits and Casey McGhee was on the base twice in that inning. We just put runners on base and let our bats take over.”

Corrigan finished the game 3-for-3 with a run scored and a team-high four runs batted in.

“It was great to get momentum going into the playoffs,” Corrigan said of the win. “That was yesterday, we are moving on to the next game that is in front of us.”

Beacher was 2-for-2 and Dom Narduzzi also collected two hits for the Blue Devils.

Corrigan also earned the pitching victory after allowing one earned run on five hits with eight strikeouts in 4 2/3 innings of work. Beacher closed out the final 1/3 of an inning.

“It’s good to get on the mound every once in a while,” Corrigan said. “Coach always has us as a team ready to compete, especially against Heights. It’s a great rivalry that we all look forward to.”

With the win, Independence improved to 10-8 on the year. The Blue Devils host Lake Ridge Academy on Tuesday in a sectional semifinal.

Mark Echstenkamper returns to the diamond