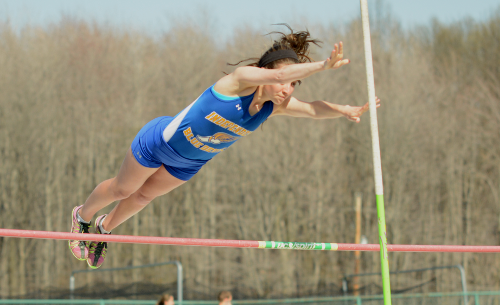 When Independence’s Amanda Pucella won first place in the pole vault at the 2014 Division II district track meet at Bedford she began to believe she could raise the bar even higher.

On Saturday, she did just that when she received the award as the Doug Amari Outstanding Field Event Performer at the 59th Annual Cuyahoga Heights Relays for clearing 10-feet, 4-inches in the vault, which also set a new school record.

“I attempted it once before at a meet on Tuesday and just about cleared it,” Pucella said. “The pole hit it so I knew I had the height. Coming into this meet I knew I could clear it.”

She also knew she wasn’t going to have much time to contemplate the jump.

Pucella also competed in the 3200-meter relay, the shuttle hurdles and she ran the 800-meter leg in the Distance Medley.

To prepare her for her jump, Independence head coach Craig Polman passed on Pucella’s attempts at lower heights to keep her fresh for the big one.

“With back-to-back events I had just ran the 800 and had to check out the pole vault,” she said. “I came back and coach passed me until the other girl was out. I jumped once at 8-foot then ran the 800 and the 4×800. With the time restrictions he gave me a rest and so I passed and skipped heights until 10-4.”

Pucella had her eyes on that mark ever since clearing 9-6 at Bedford last spring.

“Last year I looked up the record,” she said. “I didn’t even know what it was until the district meet last year. It’s been a goal of mine since then.”

Pucella didn’t have time to celebrate, she had another event to run, but she did take a moment to appreciate her accomplishment after the meet.

“I had to run right over to the shuttle relay,” she said. “I was just happy to get the school record. The best thing was getting my MVP plaque at the end presented by Mr. (Bill) Attewell and Mr. Amari, who the award was named after.”

Pucella’s 10-4 would have been good for eighth at the 2014 Division II state track meet.

Both the Independence’s boys’ and girls’ track teams finished fourth at the meet.

Amanda Pucella, Ashley Pucella, Clymer and Brooke Nelson finished second in the shuttle hurdles and the Pucellas, Nelson and Marissa Artrip were second in the distance Medley.