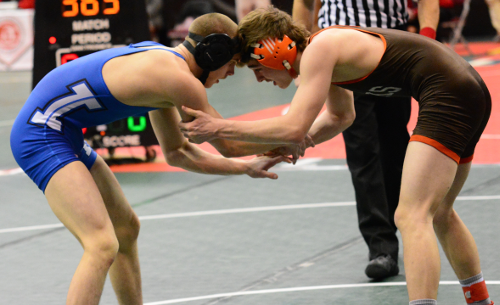 COLUMBUS—Two of Independence’s all-time great wrestlers closed out their careers over the weekend at the 2015 Ohio High School Athletic Association State Wrestling Championships at the Jerome Schottenstein Center.

“It’s bittersweet,” said Independence coach Ken DeAngelis. “There’s no easy road down here. Everyone you step on the mat with has the potential to beat you.”

Both of the Blue Devils found that out in the first round.

Spino dropped a 3-1 decision to Mechanicsburg’s Joe Ziegler, who also defeated Spino 7-0 in the seventh place match. Spino went on to win two straight bouts to earn his spot on the podium.

He came from behind to defeat Huron’s Tommy King, 2-1, in the consolation quarterfinals.

“He was a tough kid,” Spino said. “It was 0-0 after the first (period). Neither of us really could finish our takedowns. He got an escape in the second to make it 1-0. I rode him for about a minute and then he escaped with about a minute left and then we went at it, still no takedown. It was 1-0 going into the third. He was riding me most of the time and had me in the cradle position. About 10 seconds left I was able to get a reversal and get up one point and hold him there the rest of the five seconds.”

Spino, who closed out his career with a 145-42 record, was a four-time district qualifier and two-time state qualifier. He recorded 30 or more wins in each of his four seasons at Independence.

His performance in Columbus this weekend might have fallen short of his ultimate goal but considering the circumstances it was nothing short of amazing.

“I’ll tell you what, Spino has impressed me. He probably showed more heart this week because he wasn’t in school all week,” DeAngelis said. “He had a 103-edegree temperature on Tuesday. He’s been sicker than a dog. He gutted out a hard fought win in that (consolation quarterfinals) match to get up on the podium. It was impressive. Him at 100-percent would have been fun to see down here. Him wrestling how he was, he showed a lot of heart and character.”

Deely got caught in a headlock in the first round but rebounded with a 5-3 win over Bloomdale Elmwood’s Jack Hagemeyer in the first round of consolation wrestling. An early takedown helped Hamler Patrick Henry’s Brandon Bennett pull out a 3-1 win over Deely in the next round that ended the Independence wrestler’s career.

“He caught a couple tough kids and in that first round match he got it set up, we were dictating ties and got caught in a head and arm,” DeAngelis said. “That last match we’re wrestling well and get caught for a quick two. That was the difference. There’s little wiggle room at heavyweight.”

Deely closed out his career with three straight 37-win seasons to finish 127-49 at Independence. He was a three-time district qualifier and two-time state qualifier.

“I know I had a successful career because qualifying is something most guys don't get to do,” Deely said. “Yeah, I'm disappointed I didn't place, but overall I'm very happy with my wrestling career.”

Both Deely and Spino leave behind a legacy that should inspire future Blue Devils for years to come.

“Wrestling down at states is definitely something I will remember but I will also remember how close I grew with my teammates we had a lot of fun times together,” Deely said. “We were like a family.”