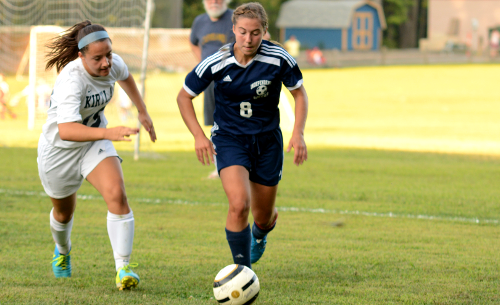 Independence senior Jennifer Wisniewski on Wednesday signed a National Letter of Intent to continue her education and soccer career at Cleveland State University.

Wisniewski, a three-time first team All-Chagrin Valley Conference and All-Greater Cleveland honoree, finished her career at Independence ranked second in scoring with 75 goals and 25 assists. Her 27 goals scored as a sophomore were a new school record and she also holds the school mark for goals in a game with five.

As a senior, Wisniewski earned second team All-Ohio honors and was named Team Offensive MVP for the third straight season.

Independence head coach Bryan Less believes Wisniewski has what it takes to thrive at the next level.

“The first thing you notice about Jen is her speed,” Less said. “She also has excellent foot skills and places her shots very accurately. Her defense is a very underrated part of her game, as I mostly had her on offense. In times of need, I have moved her back to defense, and she has stolen quite a few balls from opposing defenses while playing forward. Jen is also a student of the game, and knows where to be at all times.”

Wisniewski was simply dominant in her four year career and it wasn’t just in scoring goals.

“She also was a very good passer as she was in the top 2 on the team in assists each season,” Less said. “Jen really helped get her younger teammates to understand the game. One of the best aspects of her leadership was helping her teammates; she would push them in practice and point out small changes they could make in the games. This is so helpful to a coach, because it is a different point of view that the players can trust. Jen also constantly asked how she could get better. When a player of her talent works that hard, it really helps push the rest of the team to achieve success.”

She wasted little time making a name for herself in the high school game.

Wisniewski scored 10 goals and had five assists in earning Independence’s Rookie of the Year award as a freshman. The next year she scored 27 goals and added six assists. It was in 2012 that she first was named second team All-Ohio.

In 2013, Wisniewski punched in 13 goals with two assists.

“Jen came onto the team as a good dribbler, but progressed to have some of the best moves of any player I have seen,” Less said. “She could dribble herself open against almost any player on the field. I also saw great development in Jen's power. Early on, her finishing was off breakaways or close shots. By her senior year, Jen could score from almost any spot in the offensive third.”