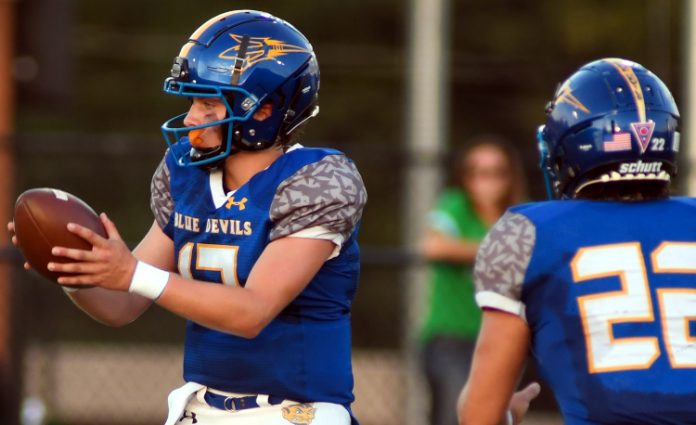 Everything that could go wrong has gone wrong—and then some—for Independence’s young football team.

The Blue Devils bounced back from a difficult stretch of games on Friday with a 36-22 nonconference win over host Warrensville Heights on Friday.

“It felt good to get a win,” said Independence coach Rick Adams. “It’s been tough sledding each week. Starting with week three, East Tech canceled on us and we find Niles McKinley at the last second. Then we just didn’t play well against (Cuyahoga) Heights in Week 4 and we had some guys out at Berkshire, and then there was last week. It’s been one thing after another, so it was finally nice to get a win.”

The 2022 campaign began with a 56-7 loss to Columbia, who is now 7-0, and then back-to-back cancelations that left the Blue Devils scrambling to find games at the last minute. A 28-6 win over Lincoln West was followed by three straight losses.

Last Friday, the Blue Devils were in a position to snap that three-game skid when they seemingly blocked a punt and tackled the Trinity punter in the end zone. The officials inexplicably called the play a touchback and awarded the ball to the Trojans, who ran out the clock.

Not only did the Blue Devils snap their four-game skid with their win over the Tigers, but they also scored a season-high 36 points in doing it.

Most of that success came via the ground game with Rory Corrigan grinding out the tough yards. The Blue Devils also had success through the air as Dom Narduzzi threw for three touchdowns.

“We were able to run the ball,” Adams said. “They were packing the box and we were running our veer off tackle and Dom did a really good job of reading and pulling. They would come down hard and everyone would collapse on Rory and he pulled and made the right reads most of the time and we had some big gains.”

When Warrensville adjusted to Independence’s running game, the Blue Devils switched up their offense and found success in the passing game.

Rocco Ressler also picked off a pass in the end zone in the first quarter.

“They were driving and he stepped up,” Adams said. “That was a huge play for us.”

Corrigan ran for 78 yards on 15 carries and scored once. Narduzzi completed seven passes for 150 yards with three touchdown passes.

“I think this win can really refocus us,” Adams said. “It was great to see the seniors step up. Ethan Ciurlik had a really good game on the offensive and defensive lines. Max Tarnowski had a big interception and a touchdown. Luke Pascarella had some big runs and big-time catches for us. Beacher had the two touchdown catches and Rory was a man running the ball today. Seeing everybody contribute was really special.”

Independence travels to Wickliffe on Friday.

North snaps another streak with win at Harvey