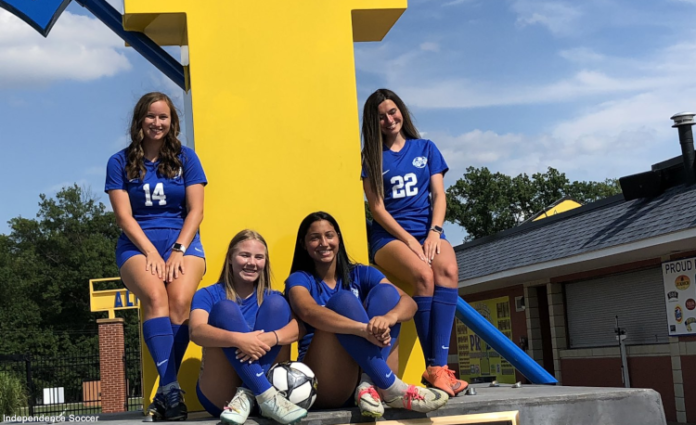 INDEPENDENCE—As the final seconds of Thursday’s Division III sectional championship game ticked away, tears began streaming down the faces of the Independence players.

Their season, and for four seniors, their careers, had come to a premature end with a 2-0 loss to league rival Wickliffe.

The day began as promising as the careers of the four seniors who played their final game on the Alumni Field turf at Stan Skoczen Stadium. While it ended abruptly, soon the seniors will reflect upon their own program-changing careers.

“The four of us are very proud of our accomplishments,” Westerburg said. “We’ve all worked very hard over our careers to achieve our goals. Soccer is a team sport though, and without the three classes ahead and behind us, we wouldn’t have found the overall success that we’ve had over the past four years.”

As freshmen, DiGeronimo and Westerburg went on to lead the Blue Devils in goals scored that season with 15 and 12, respectively. McGhee finished fifth in scoring and Belitz proved to be a weapon on the defensive third.

Independence opened the 2017 season with two straight wins and had outscored its opponents, 16-1. They lost to Berkshire, 1-0, in the third game. The Badgers went on to finish 18-1 that year, which included a second win over Independence in a district semifinal, 2-1.

That season was the start of a remarkable streak of four double-digit win seasons for a program that had won 10 or more games just three times in its history.

Independence finished 10-7-1 in both the 2017 and 2018 seasons and in 2019, something magical happened. The Blue Devils won their first league title and rode that momentum to the school’s first-ever district crown.

That 14-4-3 season ended in the regional semifinals, just one win away from the state Final Four.

The Blue Devils finished 10-7 this year closing out the careers of the four seniors with a school-record 44 wins to their credit. The Class of 2019 finished with 37 wins, the second-most in program history.

“What this statistic means to me is that I have been a part of some truly historic teams,” Belitz said. “I am honored that my class helped make the program stronger as a whole and believe we’re leaving the team in good hands striving for more achievements.”

The Class of 2019 and this class, the class of 2020, has laid the foundation for continued success.

“I am so proud of the hard work and dedication my teammates and I put into this team,” McGhee said. “Since our freshman year, my teammates and I knew the difference we could make in the program and worked hard every summer and fall to accomplish that. Leaving this team with the best career record is something we are very proud of.”

DiGeronimo closed out her career with 46 goals and 32 assists. She led the team in points scored throughout her four years with the program. She also led the team in goals scored in three of her four seasons.

The ride to the regional semis last fall is a memory DiGeronimo will cherish.

“I will never forget my junior year playing in the district final game with my best friends,” she said. “It was such an intense and exciting game to be a part of and I’m so thankful to have had the opportunity to play in that game with my teammates.”

Four years passed in the blink of an eye, or so it seemed, and while the cheeks are still damp from the rush of emotions that overcame each player after the loss to Wickliffe, soon, the tears will be replaced by smiles as each player remembers the journey.

“It truly means a lot to me,” DiGeronimo said. “We have been playing together almost all of our careers and to be able to make history together is amazing. We’ve all worked so hard to be the players we are now and to see success is so amazing.”

McGhee, who has been hobbled by injuries this season as she continues to pull double duty for the soccer and cross country teams, closed out her career with 12 goals and 14 assists.

Even more importantly, she always will be remembered for being a part of the team that made history.

“I think we have changed this program for the better in many ways,” she said. “We won the first-ever conference and district championships in school history last year and even reached the regional finals. I hope future teams see our accomplishments as a challenge to break our records. Before our freshman year, not many teams viewed Independence as a quality team and I hope we have changed that.”

Belitz scored just three goals and added two assists in her four-year career but she became known by opposing programs as a relentless defender who protected her goalkeeper at all costs.

Her tenacious attitude was developed over the years playing with her classmates and she never wanted to let them down.

“What I will remember most about my career is making school history with its first-ever conference and district championships, but also simply getting to play with my best friends, Paige, Makenna, and Riccela,” Belitz said. “We’ve played together since we were six years old and have so many amazing memories together.”

In four years, Westerburg scored 31 goals and assisted on 19 others.

She was as dangerous as any scorer on the Independence roster and with her speed on the outside, always attracted extra attention by opposing defenses.

Last fall, in the regional semifinal win, Westerburg suffered a gruesome injury when attempting a shot. Instead of striking the ball, she made direct contact with a defender’s leg.

The noise echoed throughout the stadium.

She returned this season to close out her career on her own terms, which set yet another example for the younger Blue Devils to follow.

“I hope that the younger girls learned that it takes hard work and dedication to find success in sports and in anything you do,” Westerburg said. “I hope that they always remember to have fun and not take anything for granted because it goes by quickly.”

Their careers may have ended but Belitz, DiGeronimo, McGhee, and Westerburg won’t soon be forgotten.