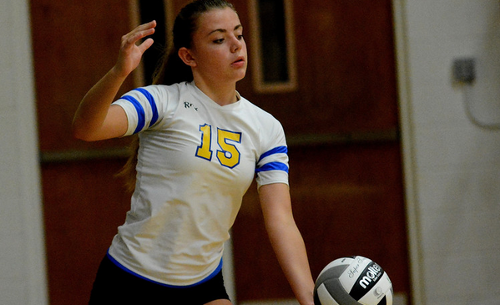 It’s easy to score points when the opposing team can’t return the serve.

That was the case for the Independence Blue Devils in a 3-0 sweep of visiting Chagrin Falls on Thursday. Led by freshman Lexi Prokopius, who recorded six service aces, Independence hammered home the serve 22 times in the match.

“Lexi stayed aggressive,” said Independence coach Megan Osysko. “She’s making strides in the front row for us but she’s proving herself as a young athlete and serving on the back line is a lot of pressure. She’s adjusting to it and doing her job.”

Five other Independence players recorded three aces in the win, which improved the Blue Devils to 5-1 overall and 5-0 in Chagrin Valley Conference play despite bumping up to the larger Chagrin Division.

“It’s nice that we did move ourselves up to the upper division this year willingly and it’s good to see we’re able to compete with these bigger schools and teams,” Osysko said.

After sweeping the Tigers, 25-16, 25-11, 25-18, the Blue Devils are doing more than competing. They’re dominating the division. They have lost just one set in five conference matches.

Senior Hallie Zumack has played a big role in that success.

Against Chagrin Falls she led the team with 10 kills and 25 assists.

“For her to be able to put down 10 kills and distribute 25 assists proves the leader she’s stepping up to be for us,” Osysko said.

Maura Collins was second on the team with eight kills and Prokopius added six. Emily Magas led the team with 17 digs and Mallory Trombetta had 10.

“We were able to get all the girls in, which is huge for down the road because everyone needs to do their job and support the team no matter if they’re playing or not,” Osysko said.

Independence hosts Orange on Tuesday then travels to Geneva on Saturday before hosting the Rene Roche Invitational on Saturday.