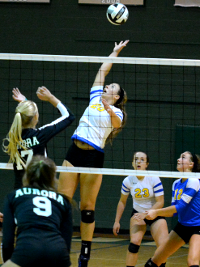 The squad kicked off the new season with a 3-0 sweep at Aurora on Tuesday.

“It was definitely good,” said second-year head coach Megan Osysko. “It was a long preseason. The girls have been working really hard and finally ready to get things started. It seemed like everyone started and we just finally got going.”

After a back-and-forth start, the Blue Devils took control of the match midway through the first set and never looked back in downing the Greenmen, 25-18, 25-21, 25-12.

Despite the key losses, Osysko remains optimistic and hasn’t changed her expectations.

“We’re just carrying the same concept that we stressed last year of taking care of our side,” Osysko said. “We don’t want any team to outwork us, so we’re going to keep that mentality and work hard for every single point.”

That strategy paid off at Aurora.

“Meg, obviously, is definitely the big leader on the floor. It’s her senior year; she carries the weight of the team on her shoulders and carries them on her back. She performs and puts herself out there,” Osysko said. “Emily is a junior coming in. She kind of split time last year but has really worked hard over the JO season and came in this year and filled in where we’re lacking Erica from last year. She contacts the ball high and works hard on the outside and is just killing it so far.”

Junior Mallory Trombetta added 18 digs and junior Hallie Zumack had 27 assists in her first year as the team’s No. 1 setter.

“Hallie is definitely stepping up,” Osysko said. “It’s her junior year and we stressed to her taking on that leadership role and running that 5-1. She runs the offense. She speeds it up when we can and has to take care of the ball every single play.”

Zumack’s performance softens the blow of losing Meredith Collins to graduation. It also helps that Meredith’s younger sister, Maura, has joined the team and already made a contribution as a freshman.

She had 7 kills at Aurora.

“She’s a freshman stepping right in,” Osysko said of Maura Collins. “It’s pretty awesome. It’s kind of like tag team. Meredith is out and she’s in.”

Independence hosts Magnificat on Thursday and Osysko expects to see her squad continue to improve.

“I always keep my expectations high,” she said. “I always like to raise the bar a little bit more for them. They did well. We started off neck and neck in that first game and got better in the second and third. That’s what we want as long as we’re improving every day. We have a long road ahead of us. We’re just going to take it game by game, team by team and point by point.”