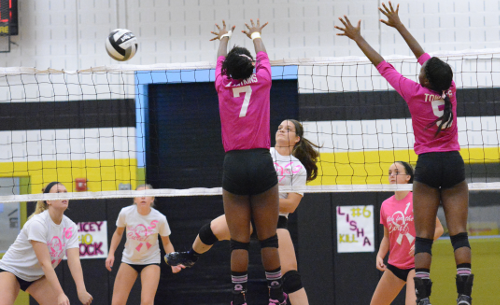 BEACHWOOD—Beachwood’s volleyball team had a season for the ages but the Bison found out on Thursday there is still work to do to compete for a league championship.

Independence, ranked No. 7 in Division III, swept the Bison, 3-0, to finish 10-0 in the Chagrin Valley Conference Metro Division for the second straight season. The Blue Devils won 25-7, 25-11, 25-17, in Beachwood's Volley for the Cure game.

“We played our game,” said Independence head coach Megan Osysko, who has guided the Blue Devils to an 18-1 mark this season after an 18-6 record and a regional finals appearance in her first year at her alma mater. “It was nice to see, especially coming off last week (a 3-0 loss to No. 2 Gilmour Academy). We were really taking care of the ball and trying to get back into our groove to get ready for the playoffs.”

The 15 wins are a school record and are more than the Bison won in the past seven seasons combined.

“We’re proud of them,” said Beachwood first-year coach Sarah Schoenhagen. “That’s something they haven’t been able to do in the last seven years combined. I still don’t think they realize how big that is for them and how good they really are.”

Independence got off to a fast start and never stopped, although the Bison kept it close in the final game.

Meanwhile, Independence was clicking on offense and defense.

“Hallie did a great job distributing the ball to hitters, getting them great sets, easy to hit,” Osysko said. “Defensively, Mallory did a great job back there. She’s the leader of our defense. Awesome job by everyone.”

Independence and Beachwood both will compete in the Division III district tournament at Elyria. The Blue Devils earned the No. 1 seed while the Bison are No. 7. Independence will play the winner of the Wickliffe/Black River sectional semifinal while the Bison will play either Columbia or Richmond Heights. Both games are scheduled for Oct. 15.

“This is it,” Schoenhagen said. “Every game from now on that they play could be their last. This is the time where they really have to learn that you have to come with that energy and intensity because this could be the last time you’re playing. It’s all or nothing. We don’t have anything to lose in the playoffs. They have to come out and play like they want it.”