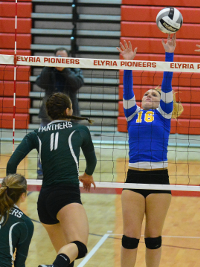 ELYRIA—Independence is headed back to the regional volleyball tournament.

“It means a lot for the program,” said Independence head coach Megan Osysko. “To do that back-to-back, that’s tough for any team to do. I’m very proud of the girls and the work that they put in.”

Independence pulled away early in the first game and never looked back.

The Blue Devils scored five straight points—off two kills each from Maura Collins and Emily Magas—to take a 13-9 lead. They outscored the Panthers, 12-4, the rest of the way.

They did it with a dominating performance on offense and defense.

As a team, the Blue Devils recorded 41 kills and only three blocks. The Panthers simply didn’t have the chance to mount an attack.

“We definitely were able to (keep them out of system),” Osysko said. “The balls that they were bringing back at us weren’t as aggressive as they normally are bringing back. They’re a good team but we were doing our thing.”

“We were able to control the first ball,” Osysko said. “Hallie did a nice job of putting it up for the hitters to get it in space to see the block and around the block and put the ball away.”

Senior Megan Screptock led the Blue Devils with 17 kills. Collins was second on the team with 13 but had nine in the first two sets as the Blue Devils imposed their will.

“(Maura) stepped up,” Osysko said. “She’s stepped up for us all year, but today she definitely put on her big girl pants and went out there and played. Everyone did a great job.”

Mallory Trombetta recorded 16 of the Blue Devils’ 60 digs. Screptock contributed with 13 and Magas had 10.

It’s that type of defensive performance that has allowed Independence to win 64 of the 72 sets it has played this season.

“We just play with that mentality of we will not let the ball hit the floor,” Osysko said. “We’ll go far that way.”

The 23-1 Blue Devils advanced to the Barberton Regional tournament where they will play Orrville, the top seed out of the Smithville District. The Red Riders swept Canton Central Catholic on Thursday to improve to 25-1 on the year.

Osysko hopes her team’s experience at regionals last year—the Blue Devils lost to Gilmour Academy in the regional semifinals—will help them get off to a fast start this season.

“Definitely being down there and seeing the atmosphere will help,” Osysko said. “We know what it’s going to be like. It’s going to be an intense place. With our schedule, we played some intense games. Hopefully that has gotten us a little more ready than last year.”