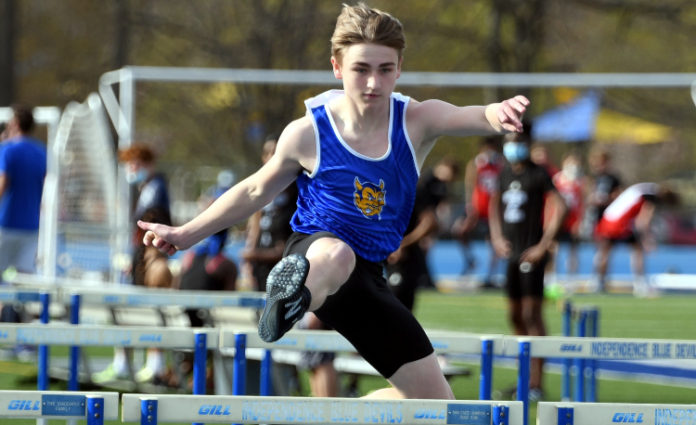 Independence recorded a clean sweep of the boys’ and girls’ team titles at the 2021 Chagrin Valley Conference Metro Division track and field championships at Cuyahoga Heights on Tuesday and Thursday.

The girls’ team finished with 155 ½ points to win its first title since 2014 and the boys closed out the meet with 135 points to claim its first conference championship since 2016.

“It was very exciting,” said Independence coach Jess Crooks. “Words can’t even describe what I’m feeling and the emotions I have right now. Our student-athletes came to race today. It was amazing to see.”

Independence claimed 11 individual event championships on the way to winning the team titles.

Casey Adams led the girls’ team with a win in the long jump, a second-place finish in the 200-meter dash, and she also finished fourth in the high jump.

“It was so exciting to win the CVC title in long jump because I had worked so hard all year with my coach,” Adams said. “I was very nervous before my 200 because I was the only freshman in the race and to place second just gave me so much relief. It was also very exciting to know that my points went towards helping the team win.”

“My best event today was my 200,” she said. “Although I did not win that event, I got a new (personal record) and knocked .3 seconds off of my old PR.”

A strong performance in her postseason opener has Adams excited for the upcoming district meet.

“Going into districts with the CVC title really does boost my confidence and it boosted the team’s morale,” she said. “Seeing how excited everyone was when they announced our teams’ names really made all the hard work we had put in worth it. I hope we can carry this energy into districts.”

Jessica Harb edged teammate Madison Stepanik for the CVC title in the discus. Harb threw the disc 109-feet, 10-inches while Stepanik came in at 104-4.

Stepanik bounced back with a win in the shot put with a toss of 35-10. Stepanik also finished seventh in the high jump on her way to being named the field events MVP.

Makenna McGhee, Gabrielle McGreevy, Kate Coljohn, and Paige Westerburg teamed up to win that race in 11:25.59.

“On the girls’ side, having those field events helps us so much,” Crooks said.

“It was really exciting for me because I was able to pick up some of the points my team needed,” Eisenmann said. “It made me happy that I was able to contribute to the team win. The key, for me, was to stick to what I knew and incorporate what my coaches taught me. It gave me a much-needed confidence boost.”

Stralka and Zygmunt teamed up with Jack Taliaferro and Mike Andryszczyk to win that event.

“Our theme before this competition these two days was a teammate may fall, but we have to pick them up,” Crooks said. “That’s exactly what both sides did today. If somebody didn’t have their best day, someone else helped them out. They passed the baton, basically.”

Four Devils score in double figures in win at Wellington