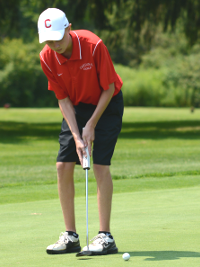 Independence’s Tyler Wilson shot a match low 35 to lead Independence to a sweep of Beachwood and Cardinal at Highland Park Golf Course on Tuesday. The Blue Devils carded a 170 while Beachwood shot 181 and Cardinal finished with a 188.

“He’s playing really well,” said Independence head coach Mark Echstenkamper. He’s just so consistent. He was at 3-under at one point (on Tuesday). He had one real tough green that he three-putted but he’s striking the ball well. He’s hitting it well over 300 yards (off the tee).”

Joey Zamborsky shot 43, Nick Brunsman finished with a 44 and Alec Jendre contributed with a 48 for the Blue Devils.

Zamborsky was especially strong on Tuesday.

“That was a nice score for him,” Echstenkamper said. “He hit the fairways and greens in regulation and never had a blowup hole. For him, that’s where he gets in trouble. He had a nice round.”

Brunsman wasn’t at his best but Echstenkamper knows things will improve.

“He was off today,” Echstenkamper said. “He’ll be better than that he just didn’t have it going. He struggled a little bit. He’ll be in the 30’s pretty consistently for us.”

Jendre has steadily improved this season and could become a solid third or fourth scorer for Independence.

“He had a nice round,” Echstenkamper said. “He didn’t get into real big trouble. We’ve still got to try to get that third and fourth scorer, so it’s important that he keeps working that score down. If he could get into the mid-40’s, that would be very helpful for us.”

Cameron Haynesworth led Beachwood with a 42 while Brandon Teitelbaum shot a 45 and Kyle Scharf and Andrew Lubinger both carded 47’s.

“We’re right on schedule,” said Beachwood head coach Will Cumpstone. “Our kids are all young. We’ve got five sophomores and one senior and he’s the only one back from the varsity squad. I thought we could average about 180 and we were at 181 with our No. 1 guy shooting below what he normally does.”

Haynesworth, Scharf and Lubinger all played junior varsity golf last season and have continued to develop their skills in the early parts of this season.

“Cam is right around where he should be,” Cumpstone said. “He should be right around a 42 to 45. He has the skills; he just has to become a little more consistent and work on the mental aspect.”

Teitelbaum is Beachwood’s No. 1 golfer and had played well up until Tuesday. The higher score isn’t something that concerns Cumpstone.

“He just struggled a bit,” Cumpstone said. “He played great on Friday when he shot 81 at Ironwood. It was just a down day for him but he’s been playing well.”

“He’s another one that’s going to be around a bogey golfer for us,” Cumpstone said. “The biggest thing we’re getting through to the younger golfers is to play bogey golf and shoot around a 45 you have to keep out of the big numbers. That’s just a mental thing for Kyle right now.”

Lubinger is in his first season of high school golf after playing soccer for the Bison last year. He has drawn praise from his coach on more than one occasion.

“He’s great,” Cumpstone said. “His conduct on the course is excellent. He carries himself very well. He’s definitely a bonus for the team this year. He’s one of the guys that I can trust to be out on the course. All the varsity guys are like that and they’re all young. We’ve got a great set of kids this year.”

Jerry Tamburro led Cardinal with a 45. Tyler Carroll and Brian Schultz both shot 47’s and Danny Knippenberg fired a 49.

Cardinal head coach Greg McCandless was pleased with his team’s effort in breaking the 200-stroke barrier.

“We played (on Monday) against Perry and Wickliffe and shot a 204 there,” he said. “We shot 188 here, so I was pleased with that. None of our guys have ever played Beachwood’s course so we did pretty well with all of those subtleties of club selection and things like that. Last year, I think we only broke 200 once. Hopefully we can keep it up and get consistent scores like this.”

Carroll and Schultz showed improvement from previous scores this season.

“If we’re going to make any waves in the CVC this year we need (Schultz) to score well and hopefully he’s on the right path,” McCandless said. “He had a rough start to the season but he had a pretty good round today. Tyler rebounded too a little bit after a rough day on Monday.”