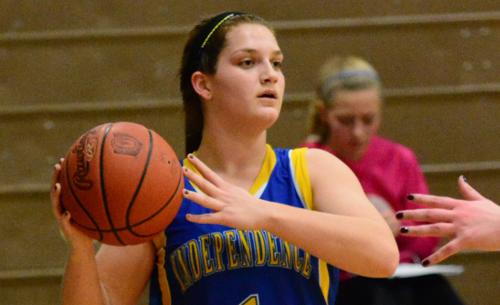 It’s all coming together for the Independence girls’ basketball team.

Led by Halle Dorko with 17 points and Victoria Sirna who added 15, the Blue Devils won at Valley Forge on Wednesday, 56-42, to increase their winning streak to three games. Independence didn’t play its best but the Blue Devils showed they can dig deep to pull out victories.

“We talked about it after the game, we kept saying to enjoy the wins,” said Independence head coach Mike Marcinko. “Nobody ever enjoys the wins enough; you always fret over the losses. We went there to win a ball game and that’s what I did. It doesn’t say ‘P’ for pretty or ‘U’ for ugly, it just says win. We gutted it out and we did what we needed to do and executed and played well enough to win. That’s ultimately the goal.”

The Blue Devils, who improved to 12-9 overall, jumped on Sirna’s back in the second quarter where she scored nine of her 15 to help break open the game.

“She’s the one that got us out and got us some breathing room,” Marcinko said. “Victoria just absolutely saved our bacon. Defensively and rebounding and shooting-wise, she really stepped up to the plate today on a day when we needed somebody along with Halle to score and do some things and boy did she step up in a big way. It was awesome.”

Hannah Walker, who was called up from the JV, scored all four of her points in the decisive second quarter.

“That really helped,” Marcinko said. “We brought her up from the JV, she’s been doing a nice job, and she had a bucket and two free throws. She only had four points but they were in the crucial second quarter.”

Although the Blue Devils didn’t play their best, Marcinko was pleased with how the girls responded to their level of play. It’s a sign of their growth and maturity.

“The nice thing I was hearing on the court and in the locker room was not whining or complaining but holding each other and themselves to a higher standard,” he said. “‘We can’t play like this. We’re better than this. We have to execute better and defend better.’ It was really nice to hear them talk like that in the locker room.”

Independence will celebrate its seniors on Saturday against Hawken in the final game of the regular season. The Blue Devils host Lutheran West in a sectional semifinal on Wednesday, Feb. 24.

Marcinko believes his team has grown more confident as the season has progressed and his players are eager for the second season.

“Hearing and seeing the growth and hearing the girls talk and seeing how they’re holding themselves, individually and collectively, to a higher standard of play and effort and efficiency, you didn’t hear that early. Not that they didn’t think it, but between us working together for X number of months you start to hear yourself speak through the kids and now they’re saying it and they’re holding themselves accountable and not only win games but to play a certain way,” he said. “It’s neat to see and neat to hear. I think they’re excited. Nobody wants the season to end. They’re excited about senior night and getting into the tournament. There’s a lot of excitement wrapped around that. We’ll keep plugging away and keep working and hopefully good things will happen.”