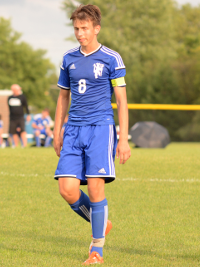 Independence’s soccer team responded to last week’s 4-0 loss at Beachwood by winning its next three games to improve to 4-2-1 on the year.

Kevin Mewhinney scored two goals and Evan Collins added another to lead the Blue Devils to a 3-0 win at Wickliffe on Thursday.

“It’s a good win for us,” said Independence coach Ryan MacRaild. “We beat the teams that we should beat and now we’re getting into the real competitive part of our schedule where some of those games could go either way.”

Mewhinney had several opportunities to find the net before giving the Blue Devils a 1-0 lead with nine seconds left in the first half.

“He’s got a lot of speed,” MacRaild said. “He actually had three or four clear chances in the first half that didn’t go in or went to the goalie or went wide. He had a goal called back in the second half for a foul they called on him for pushing off a defender. All that came from his speed.”

Collins has been on a tear the past three games.

He scored his first goal of the season in a 5-1 win over VASJ on Sept. 4 and three more in Tuesday’s 7-0 win over Berkshire.

His fifth goal of the year came at Wickliffe.

“Our two center (midfielders) played a heck of a game,” MacRaild said. “Mike Wozniak and Evan Collins kind of set the tone. Once we got things under control things started happening for us.”

Independence’s defense made sure the lead held up.

“We had a solid defensive effort out of our back four as well,” MacRaild said. “Nolan Fields at striker and Brandon Stralka had a nice game.”

Goalie Joe Bernstein on Tuesday set a new school record with his 12th career shutout. He made it 13 on Thursday.

“Any goalie worth their salt will tell you a good defense helps out but he made some good saves tonight,” MacRaild said. “He made a good save at the end of the Berkshire game that he had to make to preserve the shutout.”