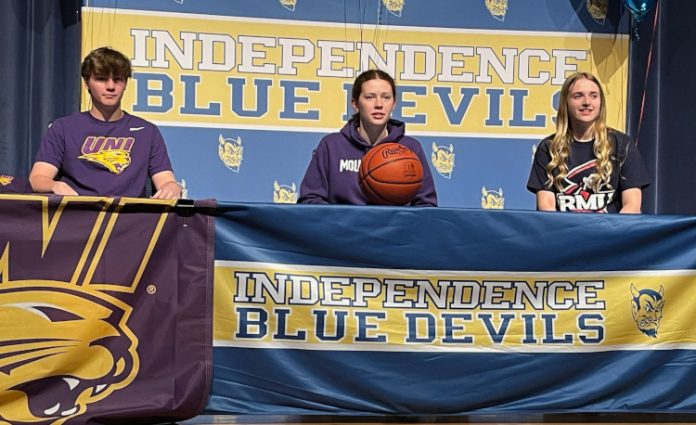 Independence on Monday held a signing day event for three athletes who will continue their education and playing careers in college.

“Signing on Monday was very exciting and definitely got rid of a little stress,” McGhee said. “I am super excited to attend The University of Northern Iowa and continue my football career. Playing in college has been a dream of mine, so making it a reality is incredible.”

McGhee converted 12-of-15 field goal attempts with a long of 44 yards and he drilled 95-of-96 point-after tries. After missing his first PAT attempt, he finished his career with a streak of 95 consecutive makes.

While he knows the competition at the next level will be fierce, he’s ready to tackle that challenge.

“I think being the new freshman coming in from out of state will be hard at first but the team and coaching staff is full of great people who will help me along the way,” he said. “I think showing how hard I work will help me fit in with the culture built at UNI.”

During his high school career, McGhee wasn’t sure which sport he’d attempt to play in college. Now that the decision has been made, he’s glad he never gave up on his dream.

“To kids who want to continue athletics in college, I say just to work hard and use the people around you to help achieve your goal,” he said. “If you dream of playing in college, just don’t give up and believe in yourself.”

McNamara committed to Robert Morris in August and then led the Blue Devils back to the Division III state championship game for the fourth consecutive season.

“Making it official on Monday definitely took away a lot of stress and weight off my shoulders,” she said. “It was a great feeling finally making my dream of playing in college official. I am beyond excited to be a part of the Robert Morris volleyball program in the fall, and I cannot wait for all of the opportunities that lie ahead.”

McNamara also understands the challenge that lies ahead of her as she embarks on her college career, but she’s eager to develop her skills and is confident she’ll be able to handle any adversity that she encounters.

“Becoming a freshman again is definitely going to have its challenges, but I need to remain confident in myself and remember that I was chosen to play here for a reason,” she said. “Also, I could not think of a better group of coaches or teammates to help guide me along the way.”

She learned a lot in her time at Independence and she hopes she left her younger teammates with a good example to follow.

“The advice I leave behind for younger athletes is that there are going to be so many challenges thrown at you throughout your career. There are going to be times when you feel like giving up, but you must remember to stay confident in yourself and in your abilities,” she said. “If playing in college is your dream, don’t stop fighting until you reach that goal.”

Weber was a four-year starter at Independence and is thrilled to have the opportunity to compete in college, even though her decision to attend Mount Union was a difficult one.

“It’s a huge relief because I feel that I have finally made my choice,” she said of Monday’s signing. “I felt like I was breaking up with someone when I told other schools no.”

While Weber understands the difficulty of thriving in college the same way she did at the high school level, she’s confident she’s up to the challenge.

“The adversity won’t be getting to me because I put up with much worse my freshman year for high school,” she said.